Yesterday marked an important milestone for the Ishida family – the very first competitive event for one of our children that had real winners and losers. OK, so there were no losers (everyone got a “spirit” medal), but they awarded first, second and third which is a big deal. Thankfully this time I didn’t have to deal with a seven year old’s disappointment because our seven year old won a third place medal in his very first Karate Tournament. It was a very big day.

We arrived at the community college gym at 8am on a Sunday morning(!). Thomas spent a little time warming up while we watched from the bleachers. 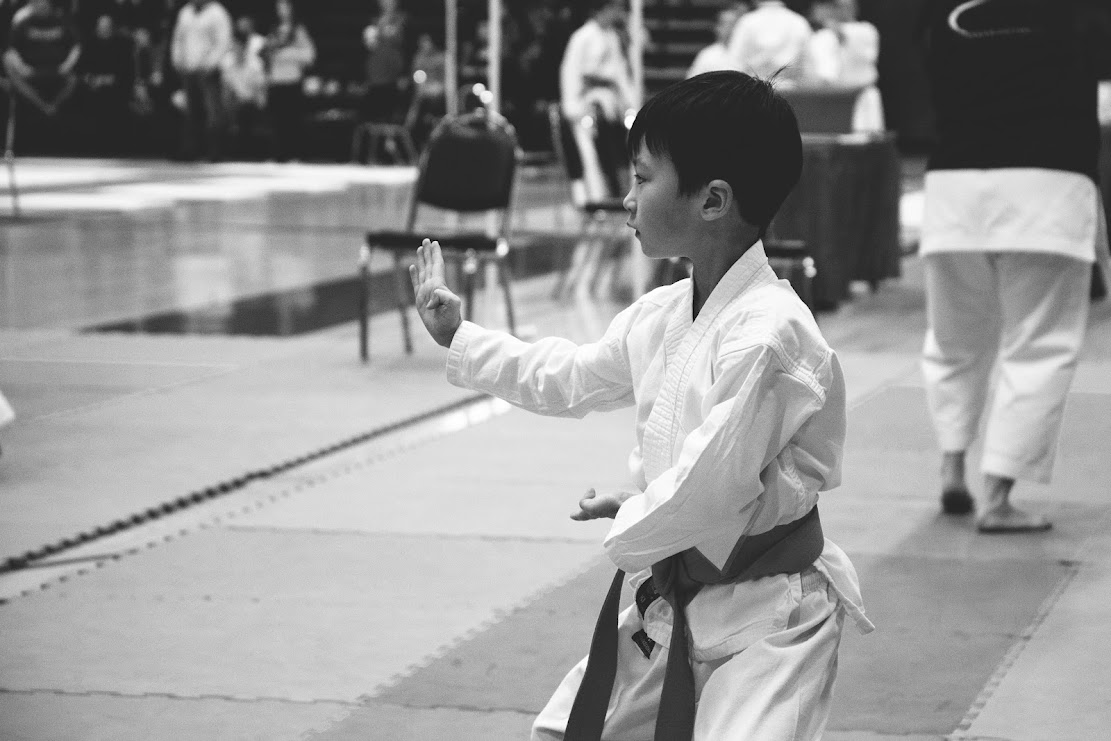 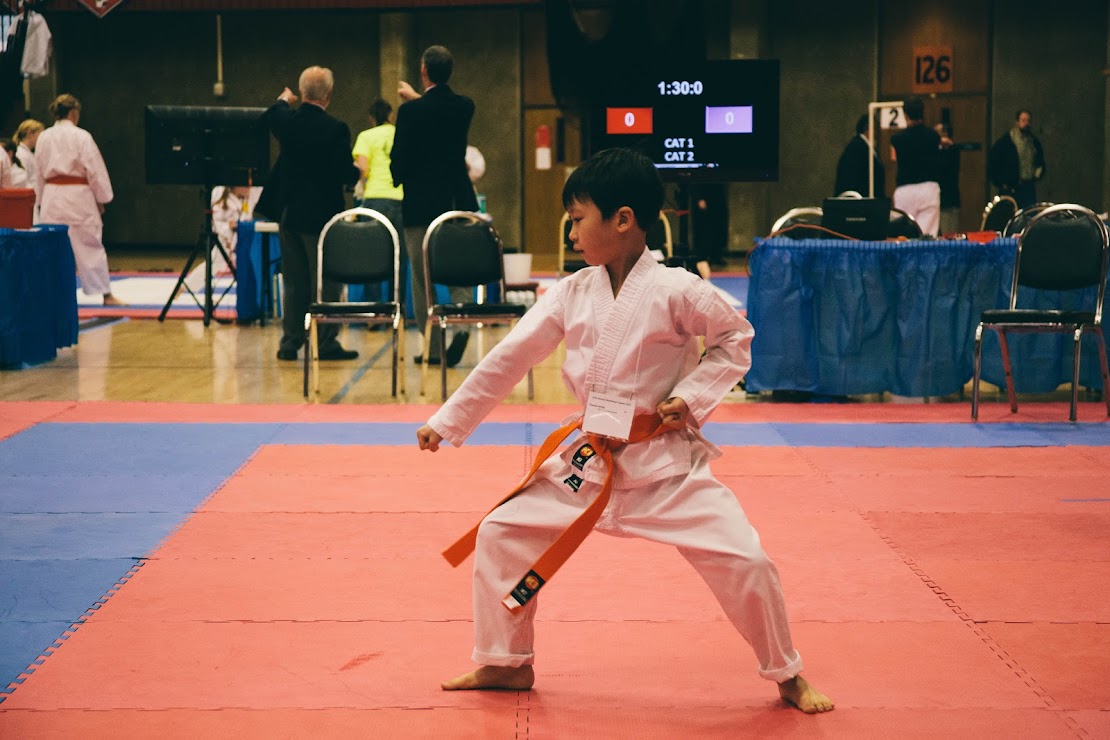 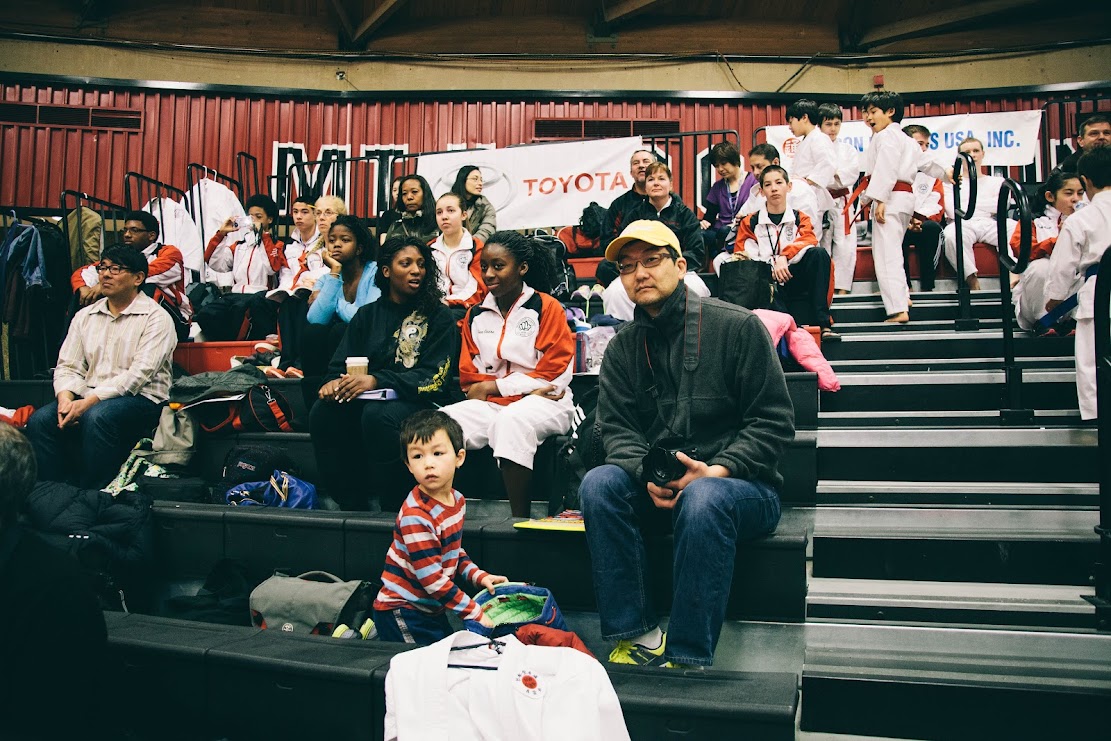 I posted on Facebook that this view made me feel transported to a scene out of Karate kid – but with a lot less teenage angst. 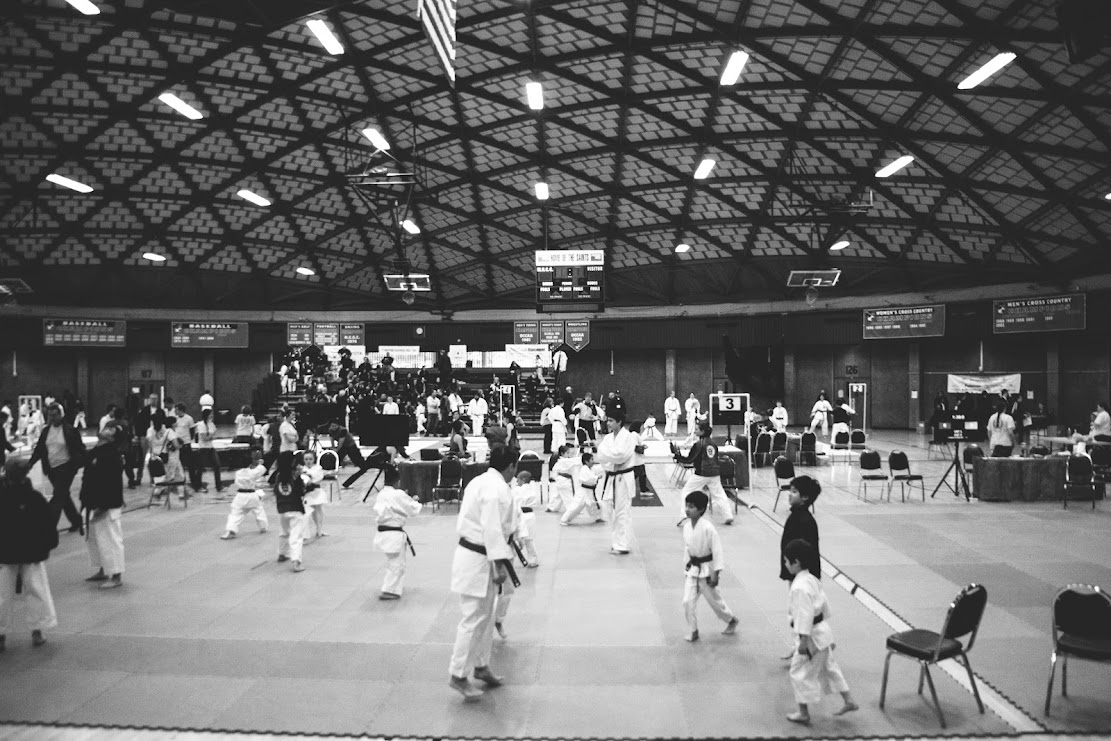 Side note: It’s been a while since I’ve seen Karate Kid. Is it too mature for a seven year old to watch?

Mr Yoshida of Mr Yoshida’s Sauce fame was the host and sponsor of the day. He has an amazing entrepreneurial story if you’re ever in need of some inspiration. 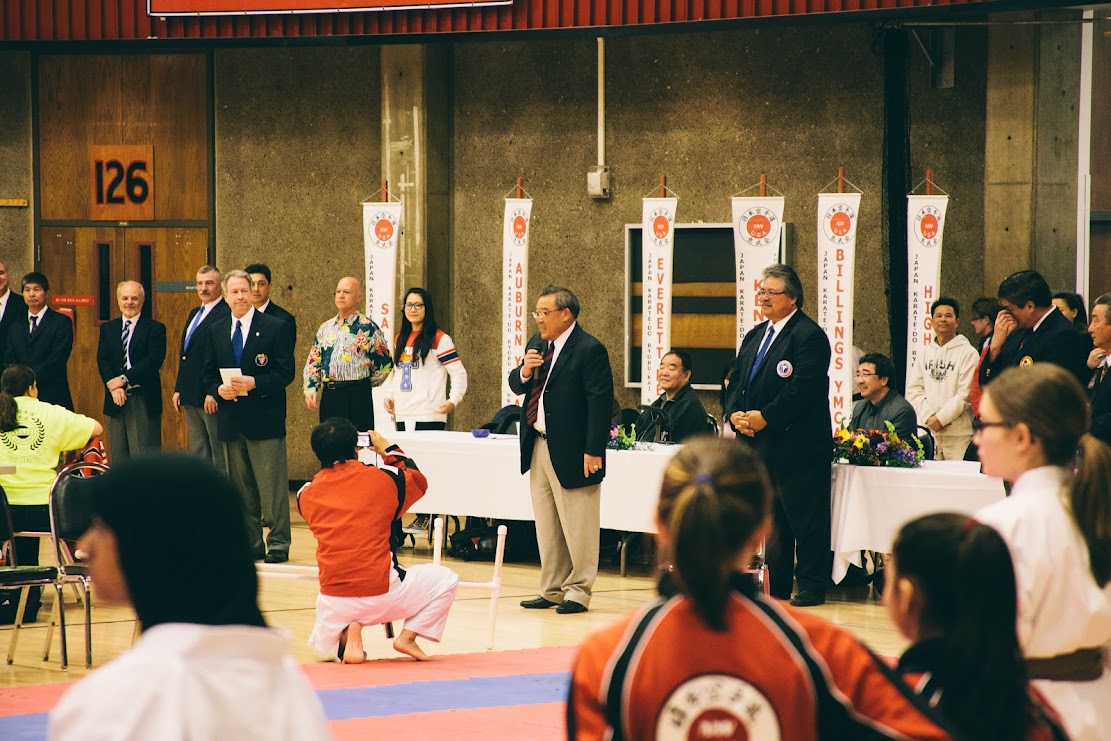 And, of course, what is an opening to a Japanese-themed event without a little Taiko drumming. I would love to learn Taiko if only I had the time. It looks like a lot of fun and a great arm workout. 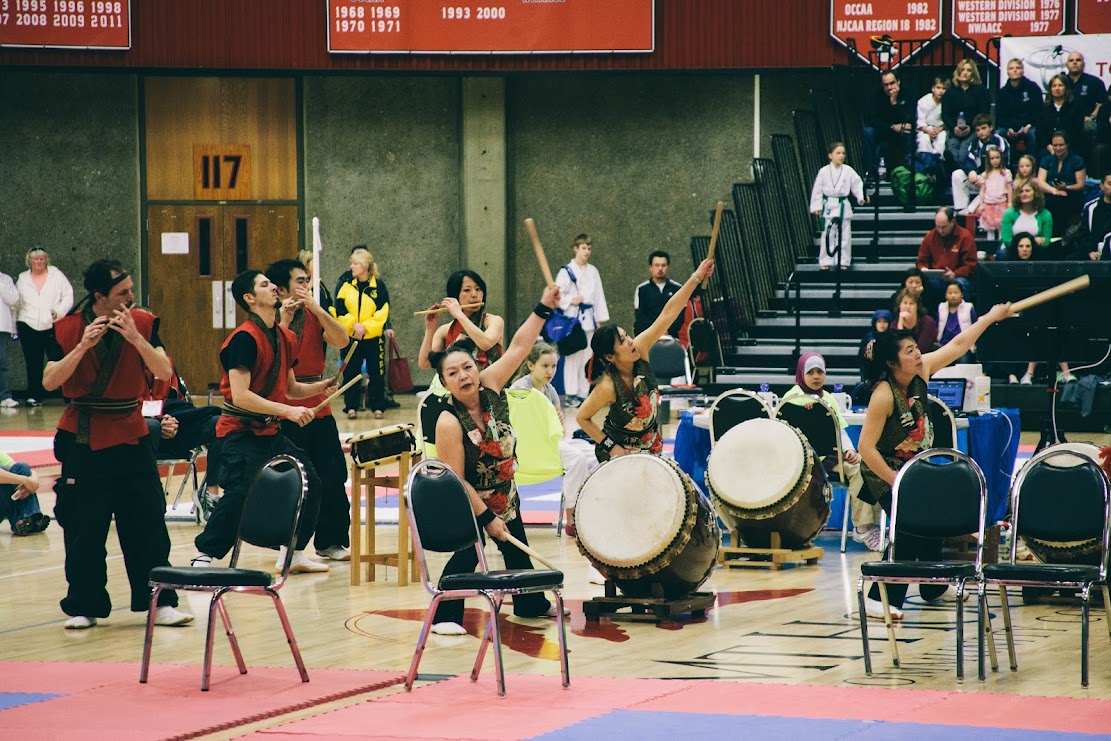 We spent the first hour watching the “weapons” contests where knives, nun chucks and big sticks were moved from hand to hand in carefully choreographed routines. One thing I love about Karate is that it’s one of the very few sports where girls compete against boys in almost every age group – and the girls often win (shhh – don’t tell my boys I said that).

After what seemed like an eternal wait, it was finally Thomas’ turn on the mat in the 6-7 year old age group. I felt better knowing that, as a seven year old, he may have a one year jump on some of the other competitors. I wasn’t prepared though for the intensity that can exist in the heart of a teeny tiny six year old. 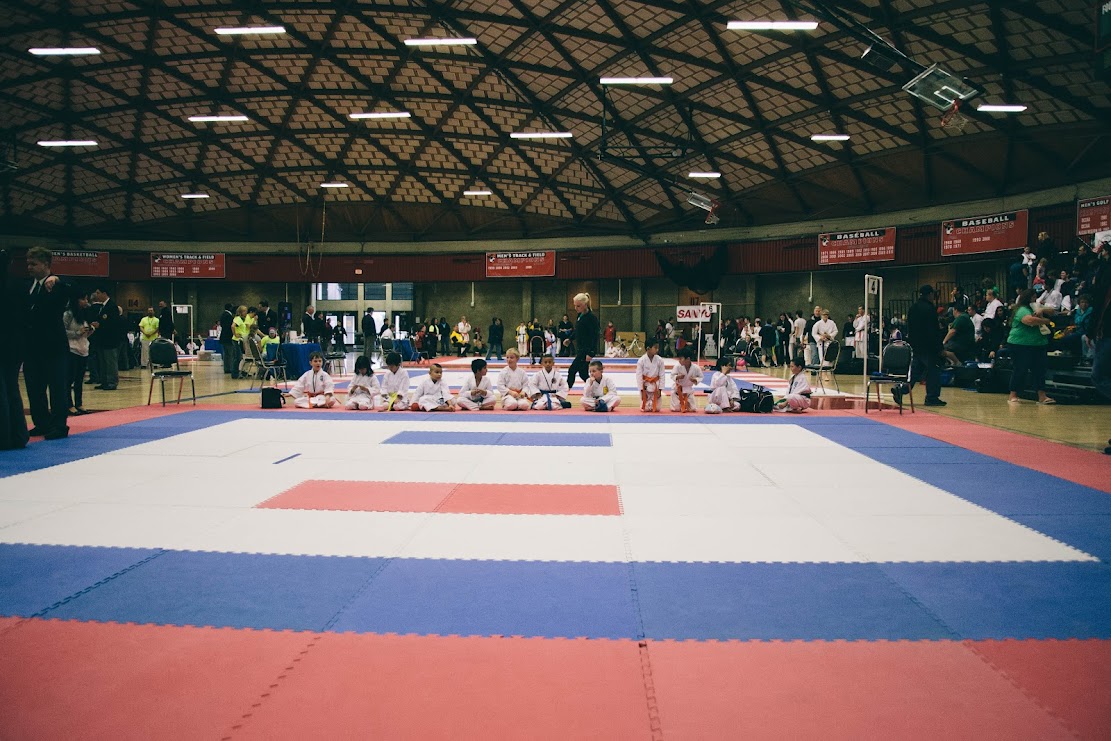 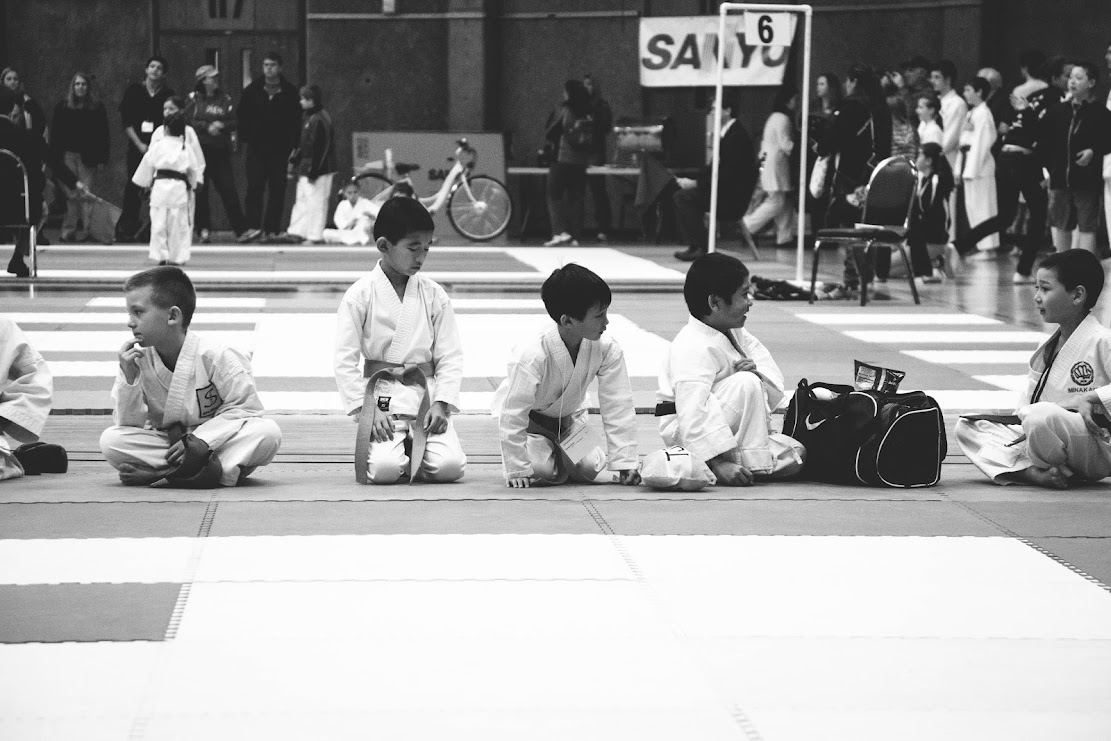 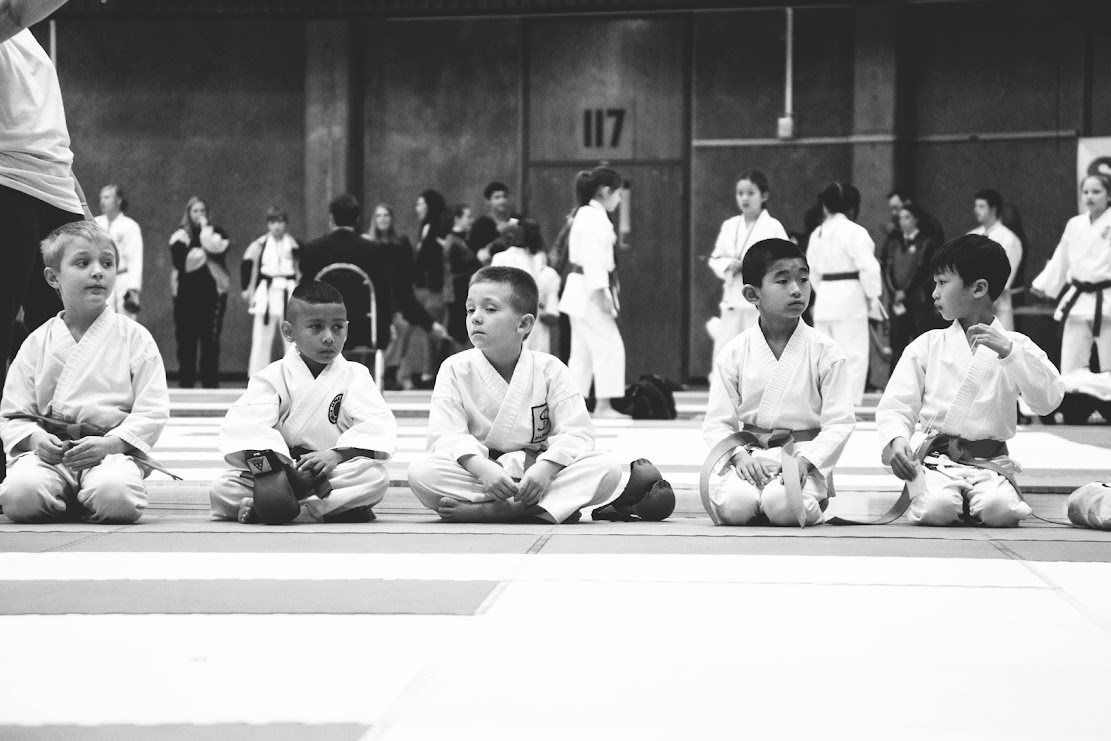 Right about this point is when the nerves kicked in (mine and Thomas’). We signed Thomas up only for the Kata contest, which means he was required to run through his karate routine at the same time as another child. Five judges sat in chairs around the edge of the mat, each with a blue flag and a red flag. At the end of the routine they each raised a flag for the child who did the best routine. To be honest, I’m not sure how they worked it out. Thomas is an orange belt and the kid that he was up against was a blue belt (two belts higher). I don’t know if they account for that difference or just judge based on the routine.

Anyway… This first kid was a little… intense. He made more noise and generally looked like he wanted to kick someone’s butt. He was also about three feet tall. 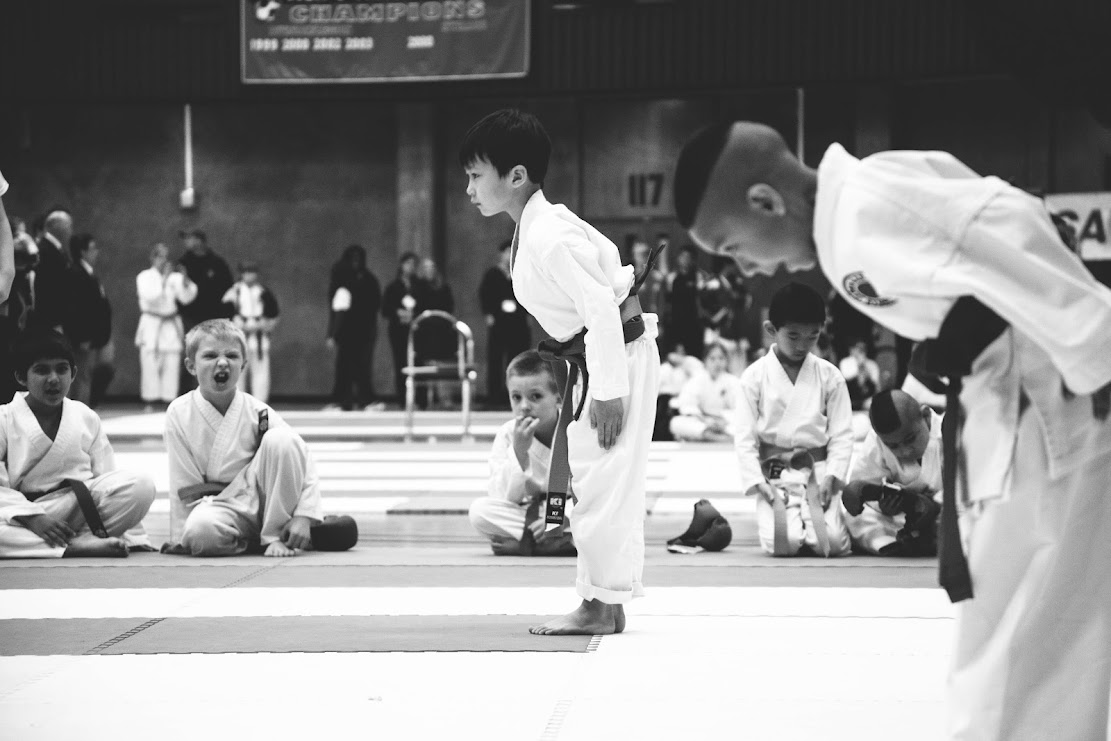 At the end of the routine I anxiously waited for the result only to see the judges raise five red flags – Thomas was blue. I began to feel a little teary, mainly because Thomas looked upset and I knew he’d be disappointed, but also because we spent $60 for him to do  a one minute kata and it seemed to be over.

But a few spars (contests? battles?) later and they called Thomas’ name again. 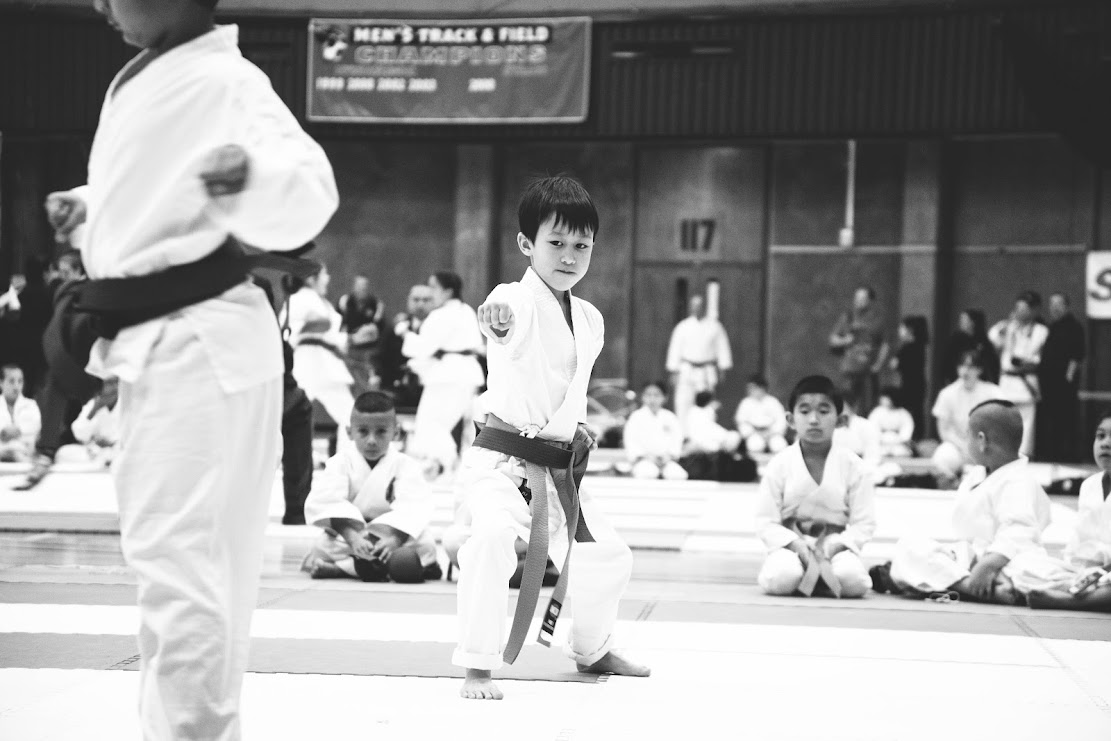 This time there were five BLUS flags. He won!

And just when I thought my heart was going to jump out of my chest, they immediately called his name again. 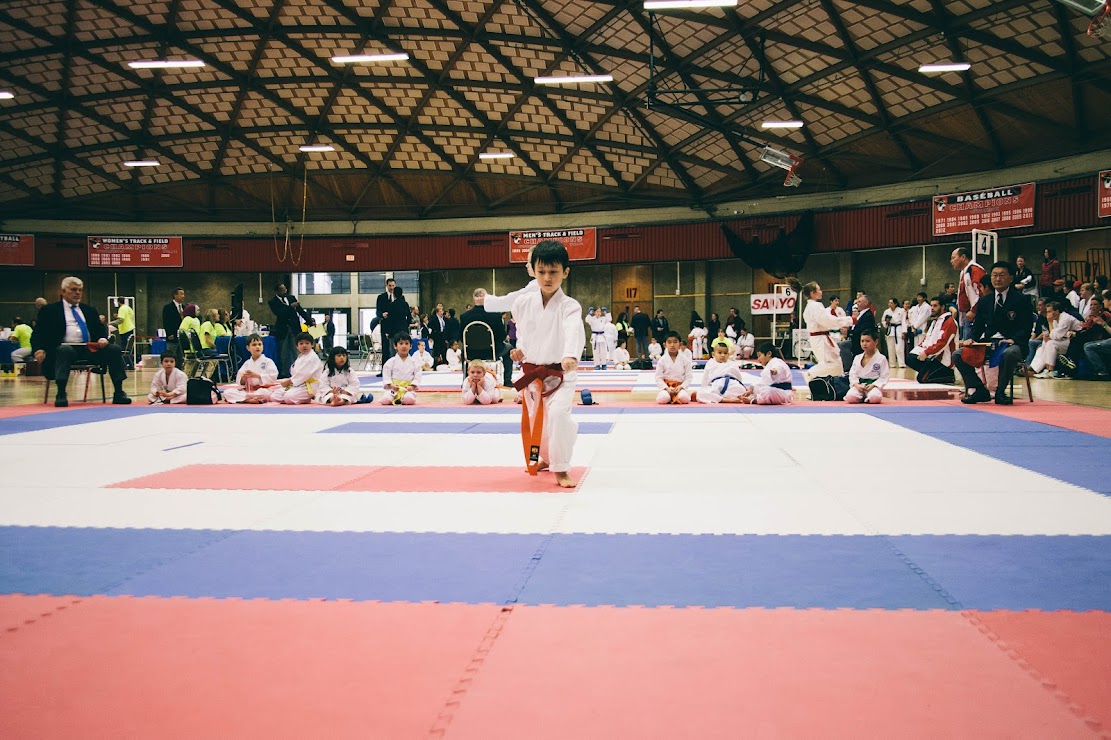 Five RED flags (he was red this time). I can’t tell you how excited and proud we were.

Samuel was pretty excited as well. 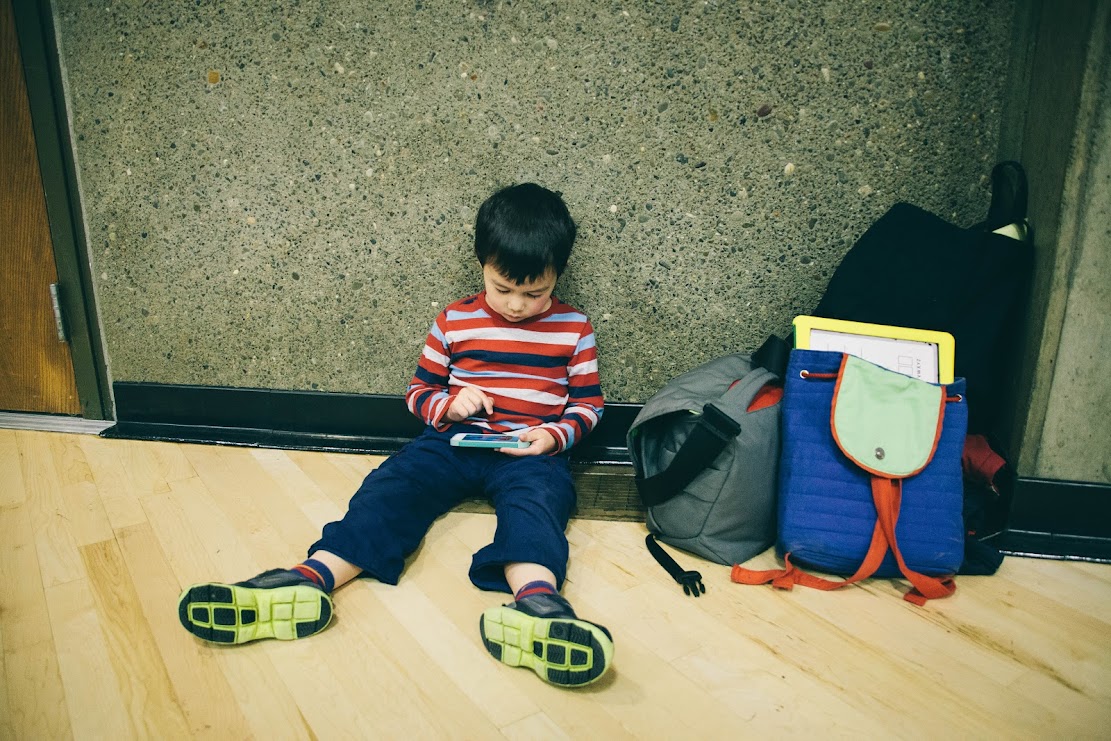 The results had to wait until after the Kumite portion of the contest. Kumite is the fighting part of Karate where they put their moves into action. We decided Thomas wasn’t ready for Kumite this year and I am so grateful we made that choice because, honestly, I wasn’t ready for it. Kumite is when the 6 and 7 year olds start to show their age. That kid who was so fierce in the first round with Thomas, turned into a mess of tears when he lost his Kumite round. Others cried when a kick or a punch hurt a little more than they were expecting. It was hard to watch but Thomas will likely do it next year. I think that’s when I’ll take my bathroom break.

After the fighting was over and the kids had stopped crying, they announced the winners of the Kata and Kumite competitions…. drumroll….Thomas won third place in the Kata! The kid who beat him won first place. 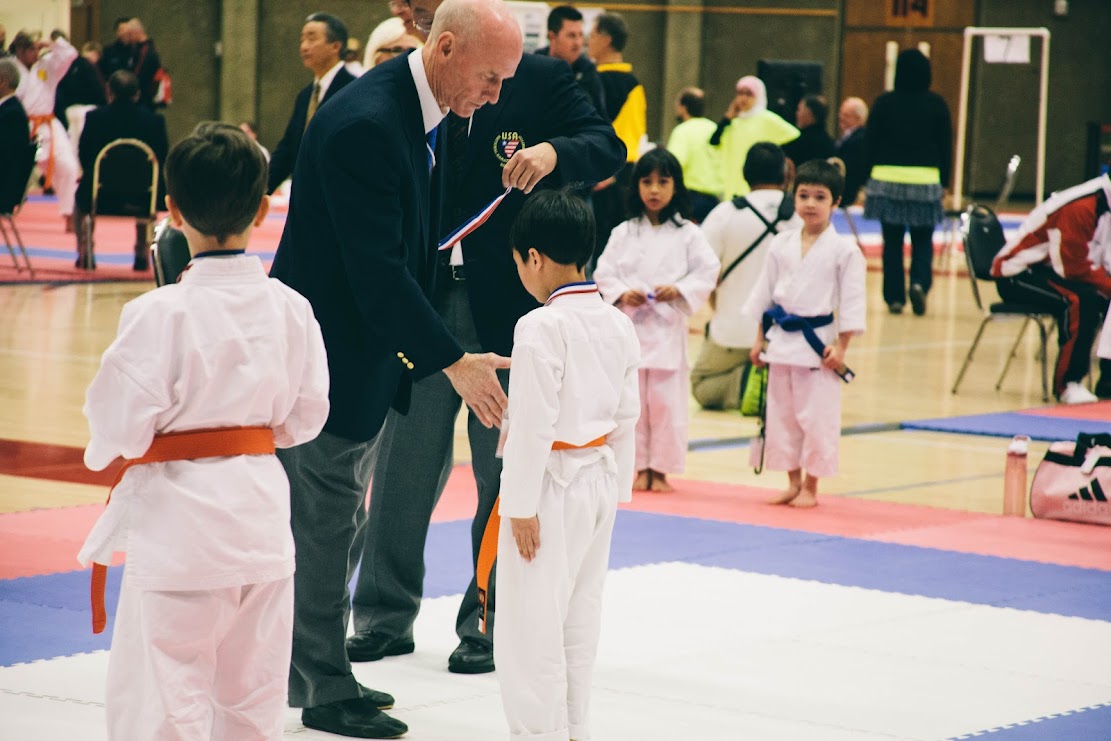 I was so happy for Thomas, especially since he’s been working so hard at his Karate over the past few months with three lessons a week and lots of practicing at home. Mostly, though, I was just relieved that we didn’t have to deal with the look in his eyes if he hadn’t won – although he still would have gone home with a spirit medal if he hadn’t placed and he definitely showed spirit.

So, I feel as though we’ve started a chapter in our lives. Next year, Samuel may be required to participate in the same tournament (although I’m willing to wait a year) and Thomas will likely be required to participate in a little hand-to-hand combat. I’m not sure that my Mummy nerves will be able to take it. My only hope is that he keeps smiling, regardless of the outcome. 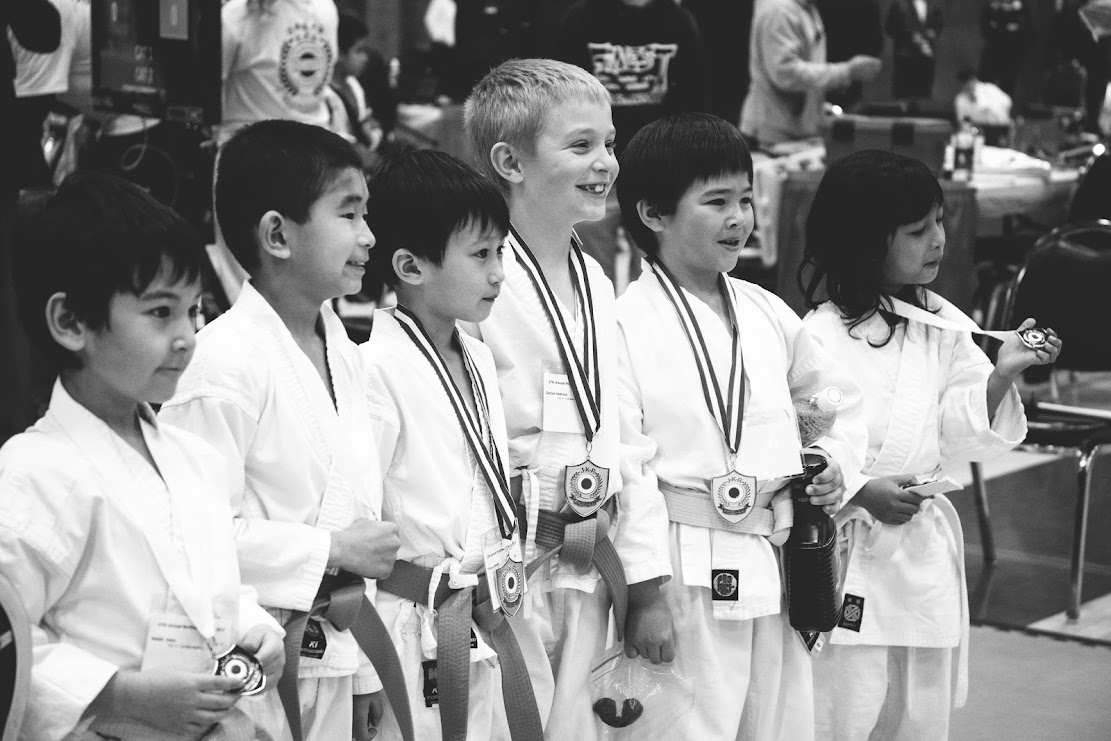 This entry was posted in Motherhood, Photography, Portland, Thomas and tagged karate, motherhood. Bookmark the permalink.