Thanksgiving was a little early this year which meant I was able to get a great head start on Christmas festivities. Instead of trying to squeeze everything in to a short three weeks, I have been granted a few extra days in which to fit every little Christmas activity on my list – not the least of which is actually getting my shopping done well in advance of the big day.

That’s the plan anyway. We’ll see how it goes.

But there’s one thing I can already mark off my list – a trip to the North Pole. A couple of months ago I bought tickets for the family on the Polar Express. The day after Thanksgiving seemed perfect to me at the time and, in most ways it was. Good weather for the drive to Hood River? Check. Two kids who were all studied up on the Polar Express movie and book? Check. A mother who was ready to move from being overstuffed with Turkey to being filled with the Christmas Spirit? Check.

There was just one thing we hadn’t counted on – a sick Daddy who was destined to be bedridden for the rest of the day. Unfortunately, the Polar Express doesn’t allow for exchanges or refunds so we made sure Kei had a glass of water by the bed, and our slightly smaller family made the trip through the Gorge to the Polar Express (actually Mt Hood Railway) station.

Of course no trip on the Polar Express is complete without brand new pair of  Superhero pajamas and a dressing gown. 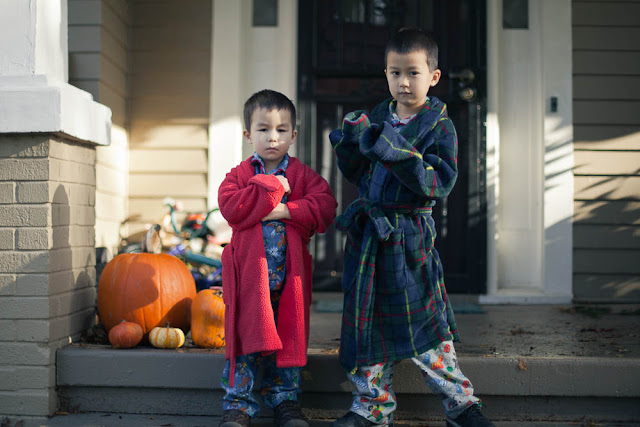 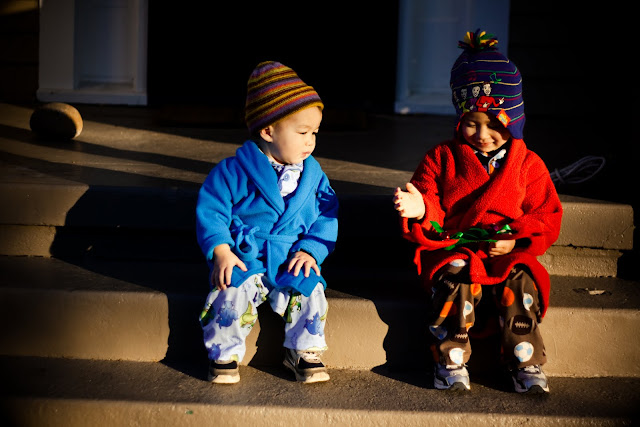 Good to see he hasn’t lost the attitude… 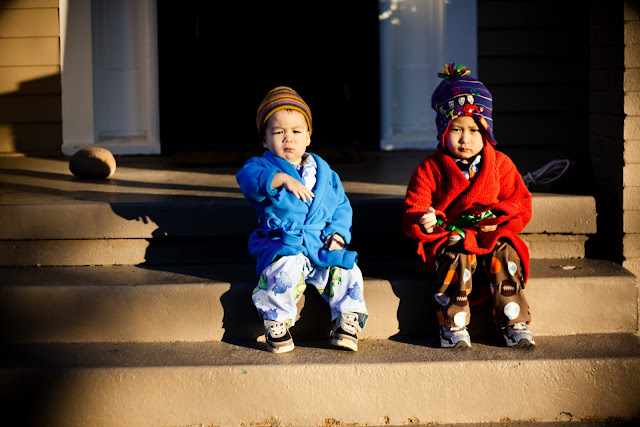 Moving on before I get all sentimental… They grow up so fast.

Before we could leave, I had to take the traditional Jedi pose Christmas photo. There’s no wearing a bath robe without one. 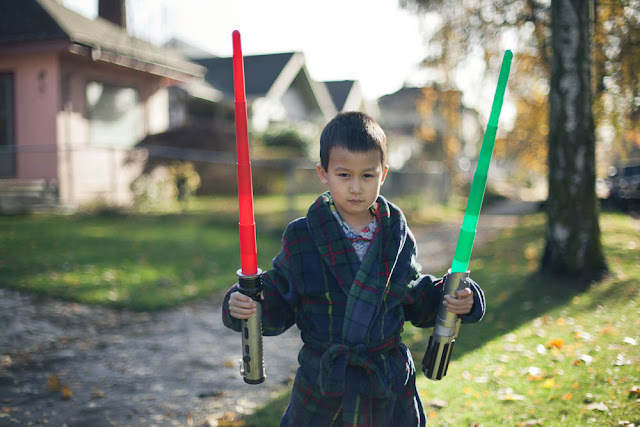 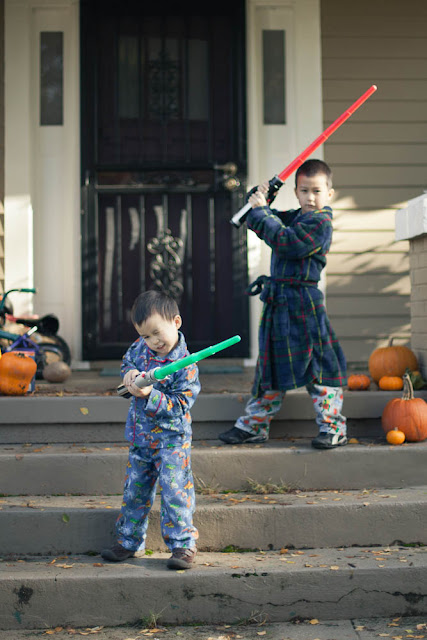 The drive to hood river takes about 90 minutes – which could be an incredibly painful experience (“When are we going to get theeeeeere?”) but instead it was a blissfully quiet experience, thanks to a strategically timed nap time departure. Before the kids even knew it, we were in Hood River and I was enjoying a Black Forest Mocha at my favorite local coffee place. Thomas and Samuel enjoyed the first hit of the sugar rush that was to last for many hours to come. 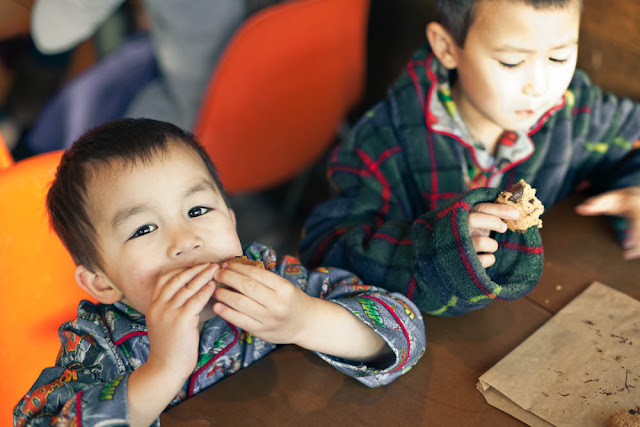 We had a little time to kill so we spent it taking a look around the local toy store (why do I do this to myself? and catching a preview glimpse of Santa in one of the main street outdoor stores.

Note to retailers: when Santa is done for the day, please don’t leave his beard on the chair. It takes far too much explanation for an observant six-year-old.

When I had finally reached my limit of “can I have this mum?”, we walked back to the station and awaited departure. 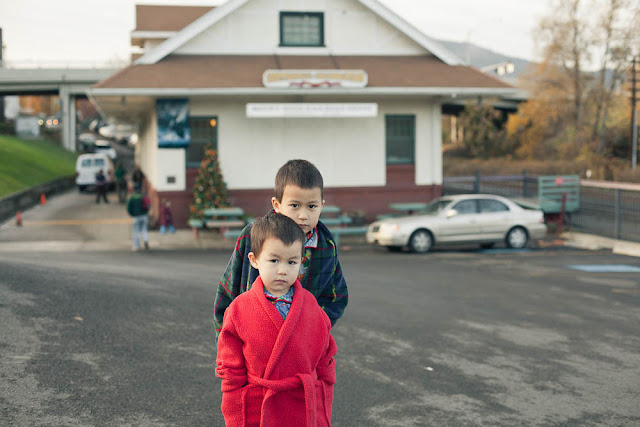 While we waited, the boys watched the movie again. Second time that day if you’re keeping count. 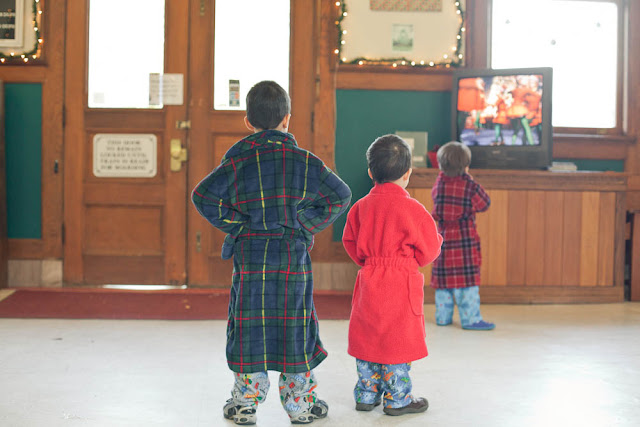 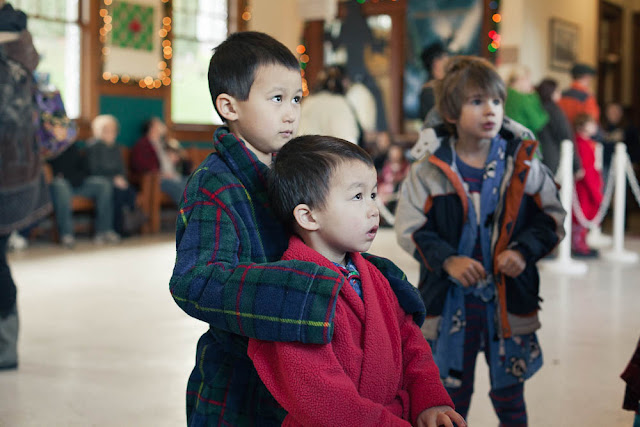 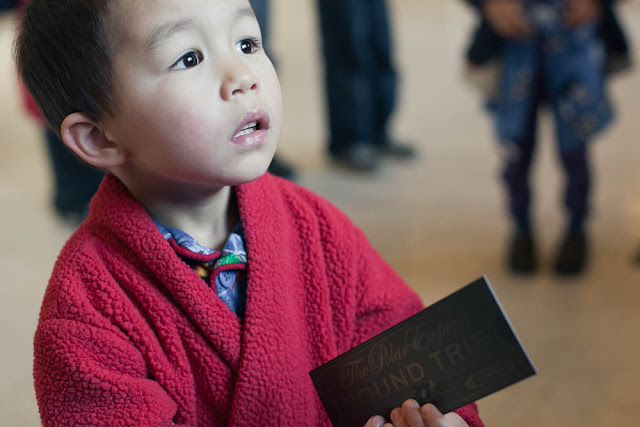 Finally, the conductor came and called “all aboard!” 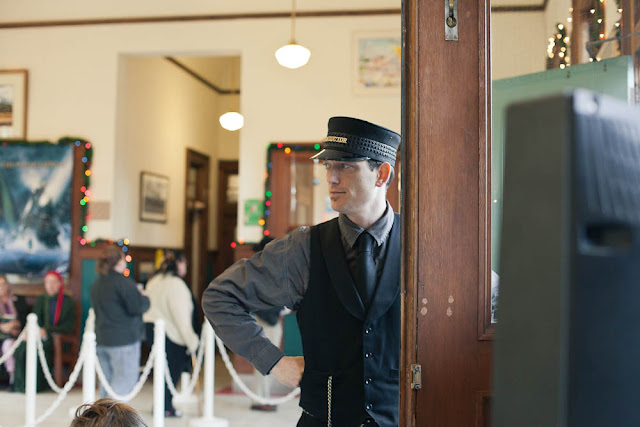 This next photo is to prove to my husband that I can pack a nutritious snack for my children. He seemed surprised when I told him that I gave them a peanut butter and jelly sandwich on the train. (“You took one WITH you?”). I can be self sufficient… 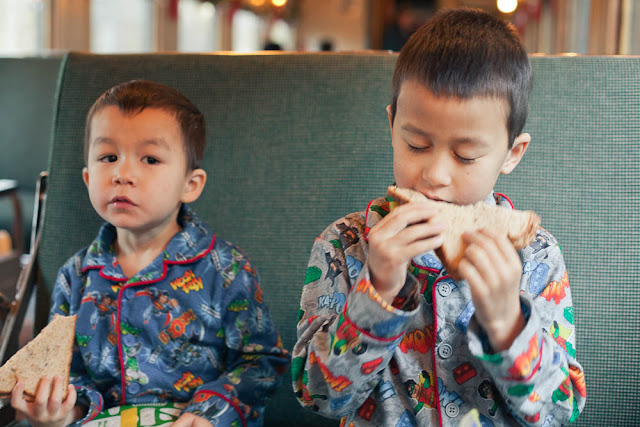 During the drive to the North Pole, a few shading-looking characters dropped by to say hello. 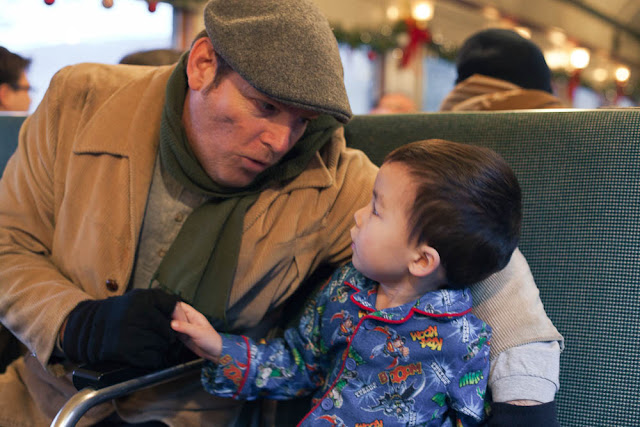 And then the waiters brought by some hot chocolate and cookies (maintaining that sugar high). 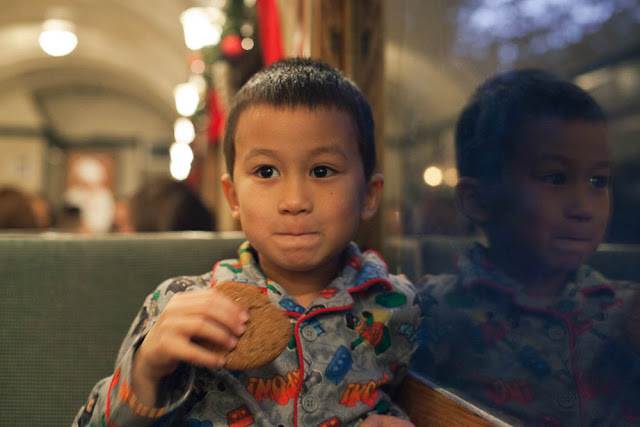 After we followed along with an audio recording of the book over the train speaker system, we finally reached the North Pole and caught a glimpse of the main attraction. 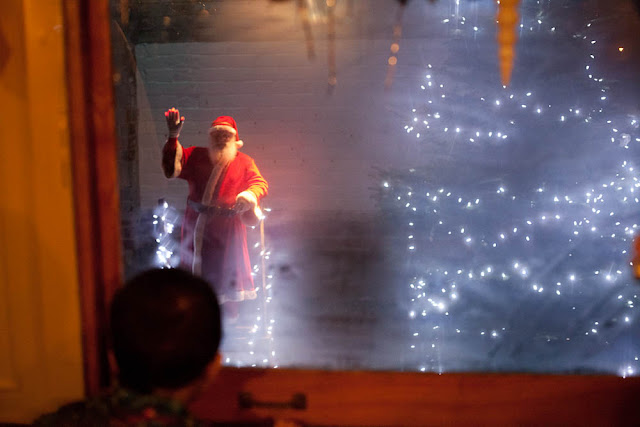 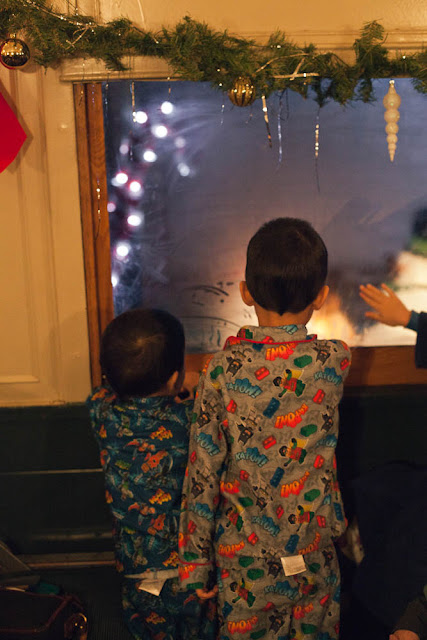 We were told he boarded the train and that he’d be around to see ever child soon. Thomas and Samuel then spent the next hour or so in this position while they waited for him to reach our carriage (we were at the back). 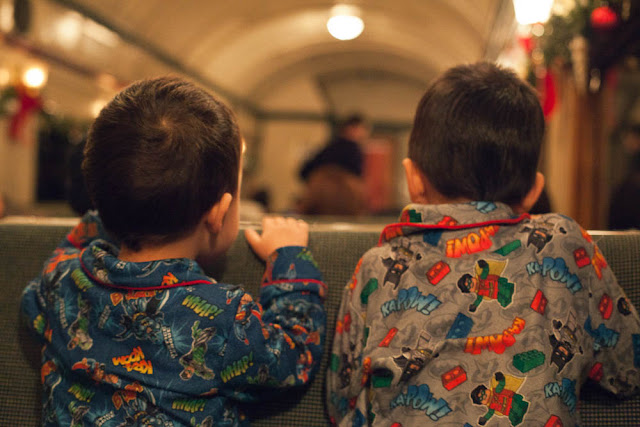 Thankfully we had a couple of elves to keep us company and were able to pass the time singing a few christmas songs. 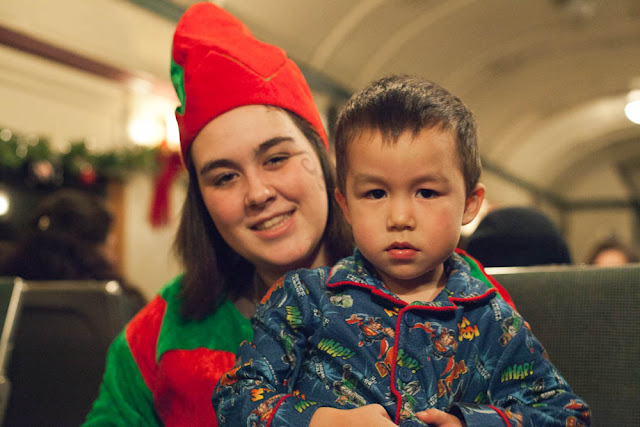 And then, after what seemed like an eternity, he made an appearance. 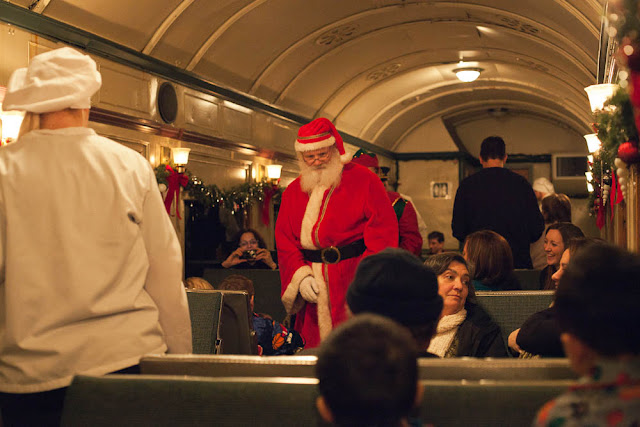 No removable beard on this one… 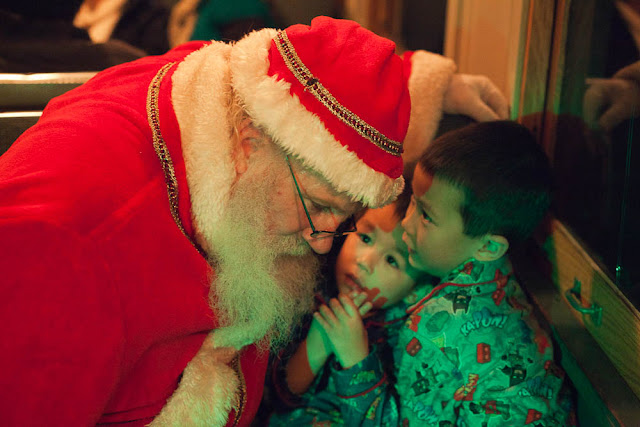 They (very quietly) told Santa what they would like for Christmas – Joker’s Playhouse for Thomas and pajamas for Samuel’s Baby (bear) and Baby Bear (his other bear). He has a wild imagination with names.

While they wait for Christmas, they can each enjoy the special bell that Santa gave them and the Polar Express tickets – punched with a “T” for Thomas and an “S” for Samuel. 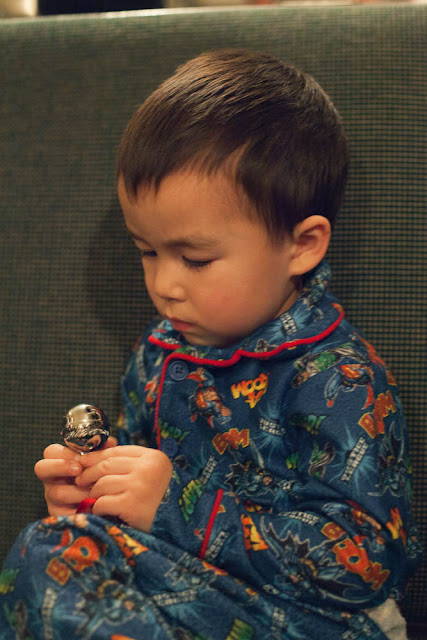 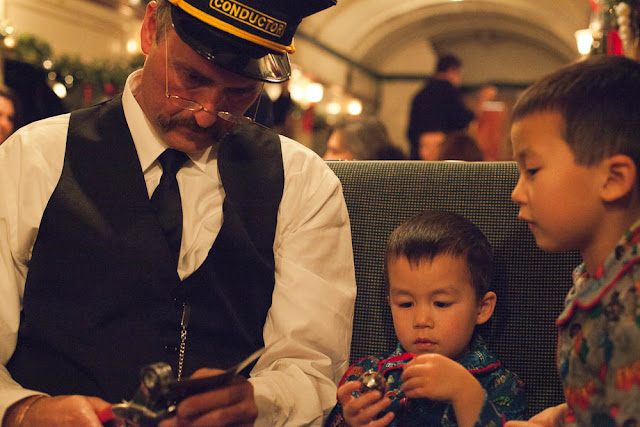 It was a wonderful, magical ride but not quite complete without Daddy to share it with. Maybe we’ll take him on a return trip next year. 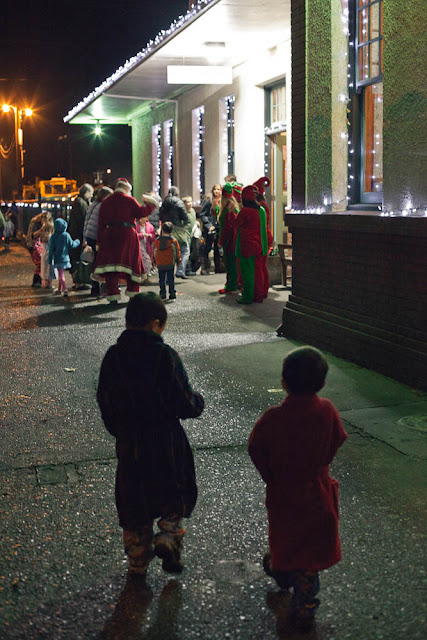 And I even made it through a long drive home with two sugar-filled children who wouldn’t sleep. Thank you rental car satellite radio. The kids station rescued my sanity.

And, finally, just one more trip down memory lane to torture myself. They grow up so fast… 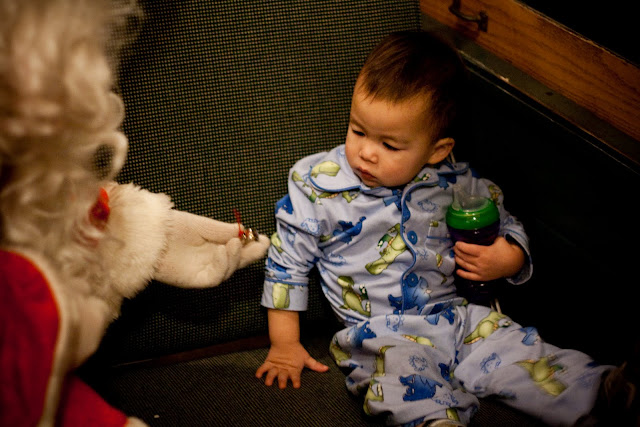