This article was originally posted on my company intranet and then on the Waggener Edstrom careers and culture blog.

Just two short months ago, I found myself compelled to respond to a post on a Portland blog called Urban Mamas. The post asked Portland families to consider hosting a Mother and Child (or children) from Japan for up to three months as a break from the radiation dangers stemming from the Daiichi power plant meltdown. Little did I know how much the simple act of offering a room to a mother in child would make such a difference in their lives and mine. The bonus was an unexpected opportunity to share their story with the world through the front page of MSNBC.com.

I have a special place in my heart for Japan, particularly the area affected by the disaster. I met my husband-to-be more than twelve years ago while we were both teaching English in Fukushima. We lived about 60 kilometers away from the Daiichi power plant and spent time in some of the coastal towns that were destroyed when the earthquake and Tsunami struck earlier this year. Needless to say, the disaster affected us both personally and we immediately started thinking about ways that we could help but, being so far away, we felt there was little we could do. My mother-in-law, who lives in Yokohama and was not directly impacted by the disaster, told us she was going through her closets to donate clothes but that the government was not asking for money.

When I read the June blog post on Urban Mamas, my eyes were opened to the continuing disaster of the nuclear plant meltdown and the impact it was having on the day-to-day lives of people in Fukushima. Playgrounds are empty because parents are being asked to keep their children indoors; food that once came from local farmers is now being shipped from across the country; electricity rationing requires residents to keep air conditioning and elevators turned off, even in high rise apartments. But the thing that struck me the most was the potential impact on the health of the small children who lived close to the plant. I can’t imagine a mother who would not want to remove her child from the potentially harmful effects of radiation, even if only for a short time.

So my husband and I took the plunge, asking our two boys to share a room, stocking up on extra sheets from Ikea and raising our hands to help. Within days, I was contacted by Mayumi, a young mother with a two-year-old daughter, Karin, who had the means and the motivation to leave. We emailed back and forth for a couple of weeks and, before I knew it, I was picking them up at Portland airport. A visitor VISA allows Karin and Mayumi to stay for just a few months, but that’s enough time to give Karin the chance to run around outside for the Summer and heal some of the damage that may have already been caused by exposure to radiation. It also provides Mayumi with a break from the incredible stress that she’s been under since the earthquake in March.

Of course I was a little worried about offering to share our (small) house and our lives with complete strangers for two months but, from the moment they arrived, it felt as though Karin and Mayumi had been with us forever – in the best possible way. My children have also adapted well. Thomas, my five year old, has taken Karin under his wing and Samuel, 3, is cautious, but friendly – which is the most we can ask for given he had to give up his bedroom and his space is now being infiltrated by a being of similar size, stature and cuteness.

Mayumi and I spent her first night of her stay talking about her experience in Japan after the Tsunami – she in her broken English and me in my VERY broken Japanese. She talked about how the playgrounds in her neighborhood were empty due to the fear of radiation. How Karin no longer took afternoon naps because she didn’t get enough physical activity to tire her out. How they never left the house except to run errands.

Mayumi’s husband, Shinya, had to stay in Fukushima for work so I try to help ease the pain of separation by sharing pictures and stories of their visit on my blog. They also connect regularly through Skype.

Sharing Their Story with The World
One very unexpected outcome from this experience has been the opportunity to be part of an MSNBC storyabout the disaster in Japan and the many Portland families who  are hosting families from the region. The story, along with a photograph taken in front of my house, posted on the front page of MSNBC.com today and I am in the process of encouraging everyone I know to read it so that they can understand the seriousness of the situation in Japan and the real fears that these mothers are experiencing.

Mayumi and Karin travel home in two weeks. They’ll be facing a lot of fear and uncertainty – and I’m sure there’ll be no shortage of tears at the airport – but at least they now know that they have a respite from the stress at home anytime they are able to come back to Portland. They also have comfort in the knowledge that their story has been told.

We returned home from our short beach vacation today and I am back at the computer – which means no more attempts to post on the blog from my iPhone. Despite my super-human vision (last optometrist exam said I am now 20/15 – bless you Laser Surgery), I find the iPhone painful when trying to type more than one sentence.

So, while I sift through the hundreds of photos I took over the past week, I’ll work on re-posting the article I linked to a couple of days ago that shares a little background about how Mayumi and Karin came to stay with us. I want to make sure it’s saved here as well as on my company blog.

If you happened to have read it the other day, please accept my gratitude in the form of this pretty picture of Nye beach, just after the sun went down.

Back with the re-posted article and more about our beach adventure soon. 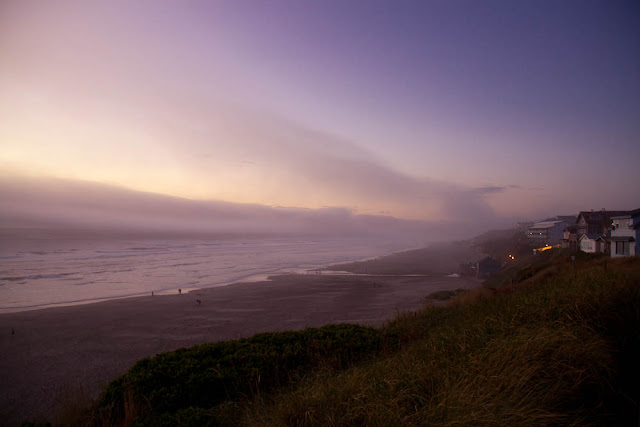