A couple of years ago we decided that the boys would have a birthday party only on every even year. So when they turned 5 and 7, birthday celebrations were limited to a family dinner and maybe a friend or two over to watch a movie. And I secretly gave myself a little pat on the back for taking a step to simplify my life. Of course the downside to this plan is that Thomas just turned 8 and Samuel turns 6 in May and now I owe them a couple of birthday parties.

Yes, Thomas is obsessed with Harry Potter, which meant that his dream birthday party had to take place at Hogwarts. Since flying to (fake) Hogwarts wasn’t an option this year, we brought the Hogwarts experience to our little house in Portland. It was a lot of work but, thanks to some internet research and a couple of ideas of our own, I think we created an environment that, although not  a perfect replica, would have made Professor Dumbledore proud.

I was so busy setting up and then managing the entertainment for 11 boys that I wasn’t able to take many photos, although I did run around in the three minutes between brushing my teeth and the first guest’s arrival to make sure I captured evidence of our hard work. I should have hired a photographer (Ha!). Here’s a small look at our crazy couple of hours in the Wizarding world.

Upon arrival, guests were invited to board the Hogwarts express through platform 9 3/4. I bought a brick wall backdrop on Amazon that we hung from our front porch with string. I found the platform sign online. 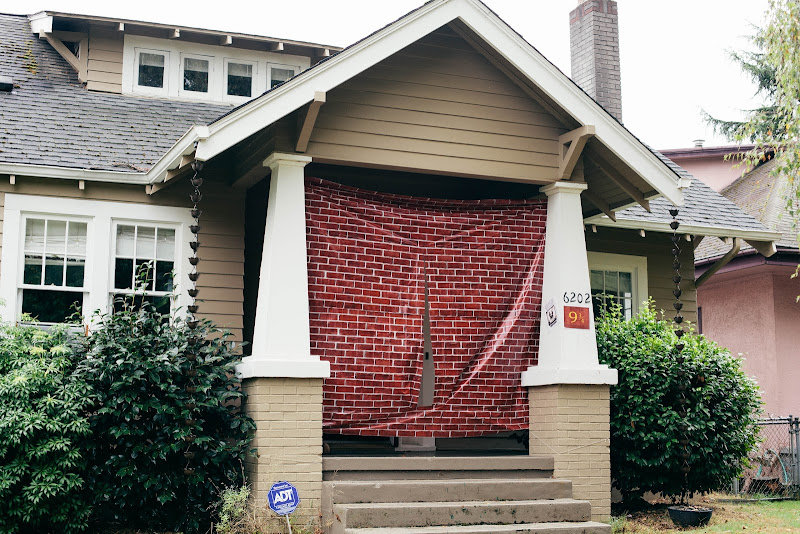 To help with the authenticity, Thomas and I had fun plastering Sirius Black wanted posters all over the inside of the house. 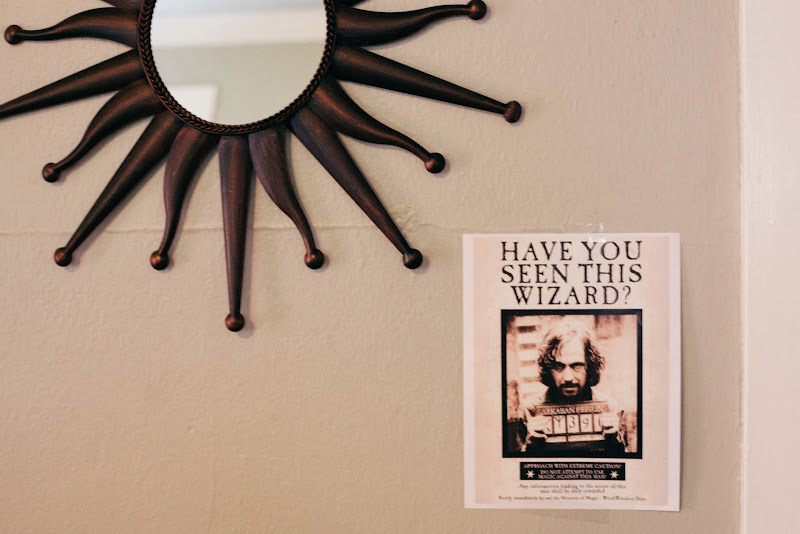 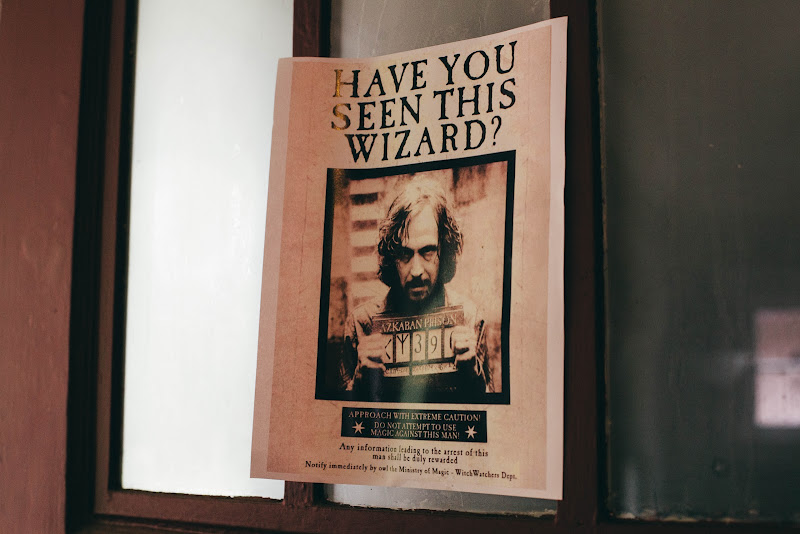 I found this idea online and thought it was so much fun. Sadly the Fat Lady painting and password request was lost on most of the kids. Thomas thought it was a little weird which made it worth the effort. 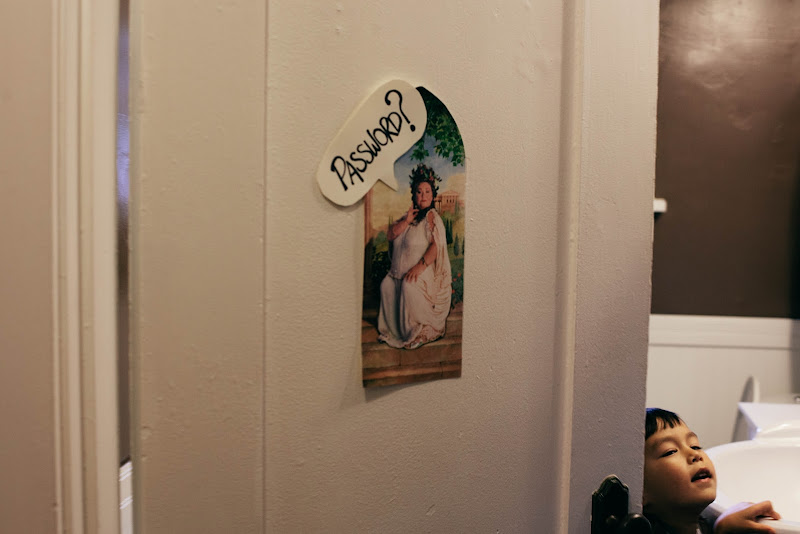 Most of the party took place in our dining room which leads out to the deck and backyard. The weather gods were kind to us and we managed to have the party in a perfect little two hour window between thunderstorms which likely saved my sanity.

I set up a “Potion” station with water that was available throughout the party. Later, during cake time, I used another idea I found online and added a little food coloring to the cups before filling them up with Sprite or Lemonade. The boys were excited to see their drinks in different colors. A fun and easy magic trick. I only wish I’d managed to get a photograph. 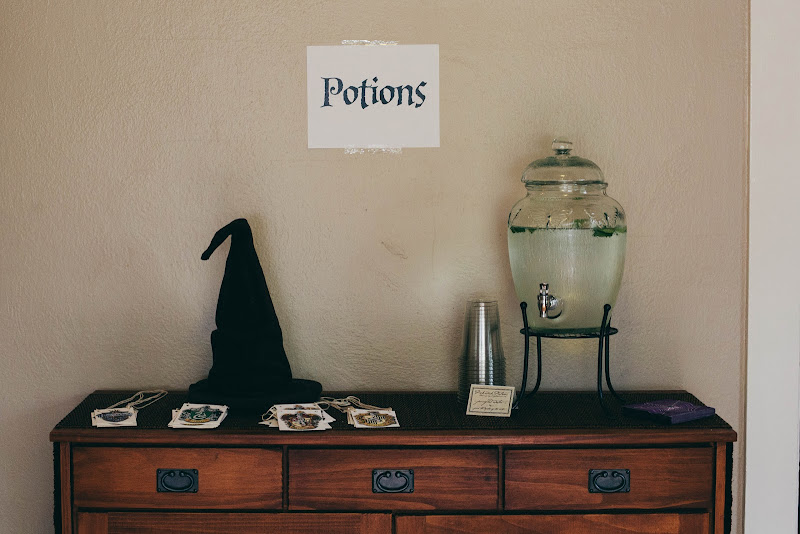 As the boys arrived I set them immediately to work decorating their magic wands. Kei cut pieces of dowel into 10 inch lengths and I placed a bunch of decorating items on the table including permanent markers in different colors, glitter glue and washi tape, but the biggest hit by far was the gold and silver duck tape. I was really impressed with the boys’ creativity and consider this activity a huge success. 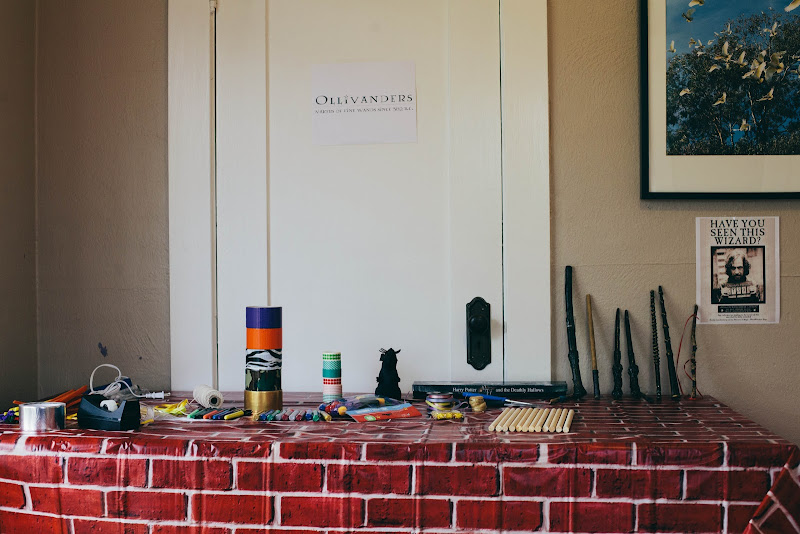 Some of the guests even went on to decorate their “broomsticks”. 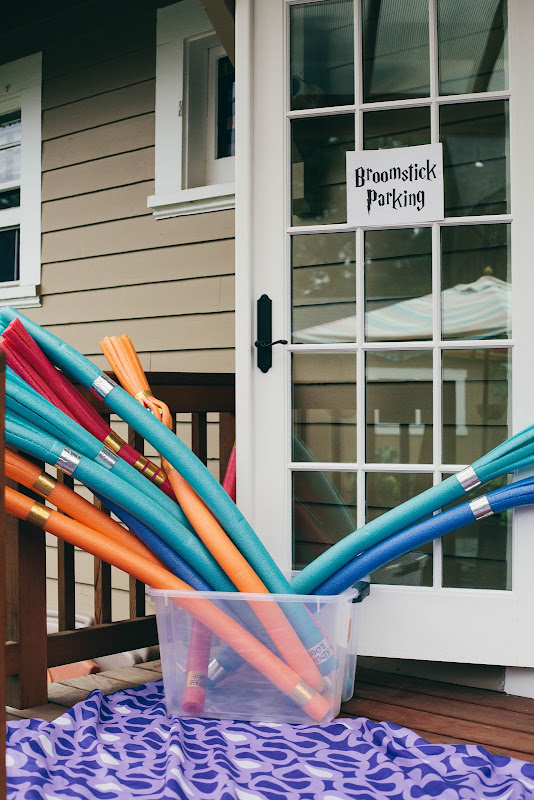 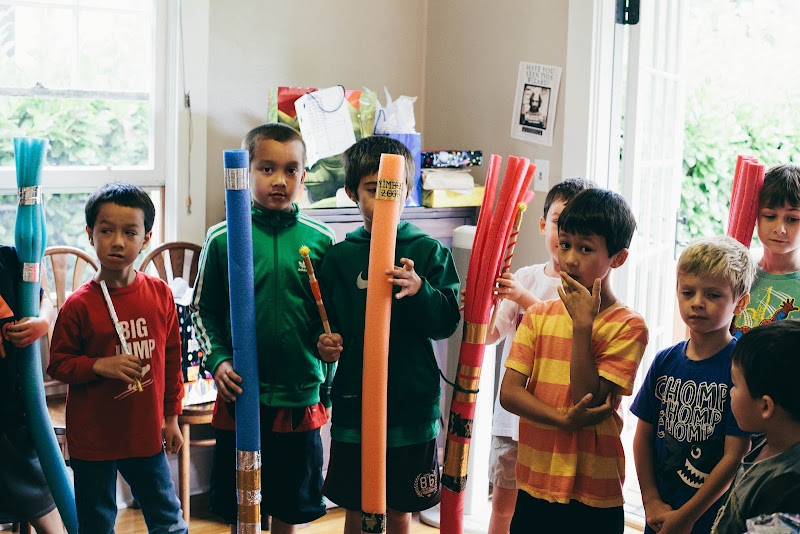 Kei had the brilliant idea to create them out of pool noodles because you just can’t play Quidditch without a broomstick, but more on that later. First we had to assign guests to their house with the help of a sorting hat that I borrowed from a very creative friend who made it for his own son’s birthday party. 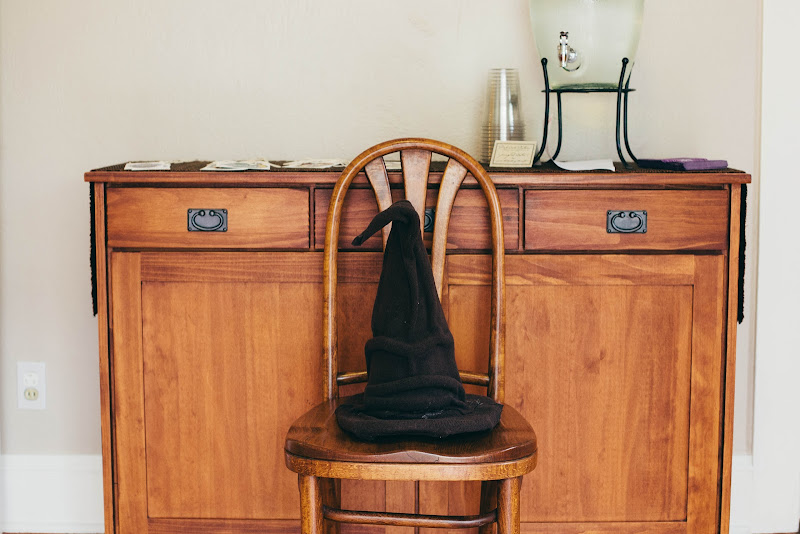 We knew the sorting hat ceremony could prove problematic because almost everyone wants to be in Griffindor, so I made extra Griffindor badges (house crests printed on cardboard) and let the boys choose their own house. Kei provided the voice of the sorting hat. 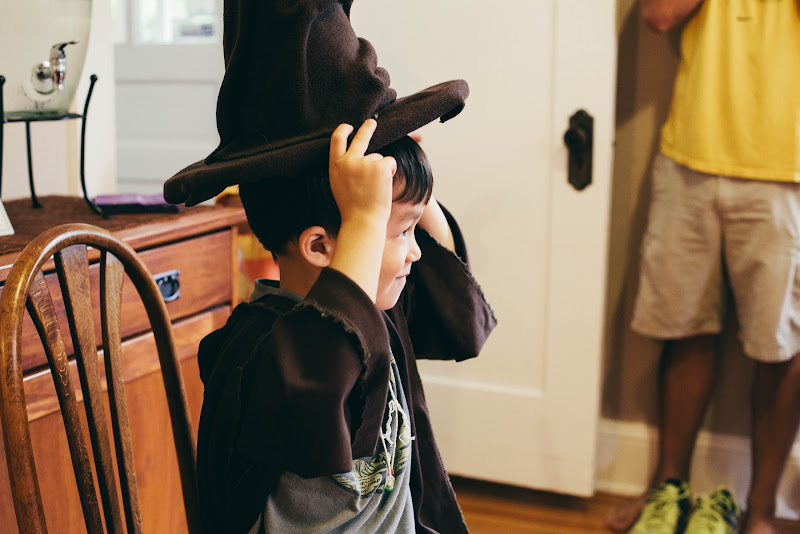 By the time we finished sorting everyone into houses, it was clear that we needed to get everyone running around. Our original plan was to set the Quidditch field up over at the park but, with the threat of thunder and lightning, we decided it was safer to stay close to home. Kei built some very impressive Quidditch goals using dollar store Hoola Hoops and wooden stakes. 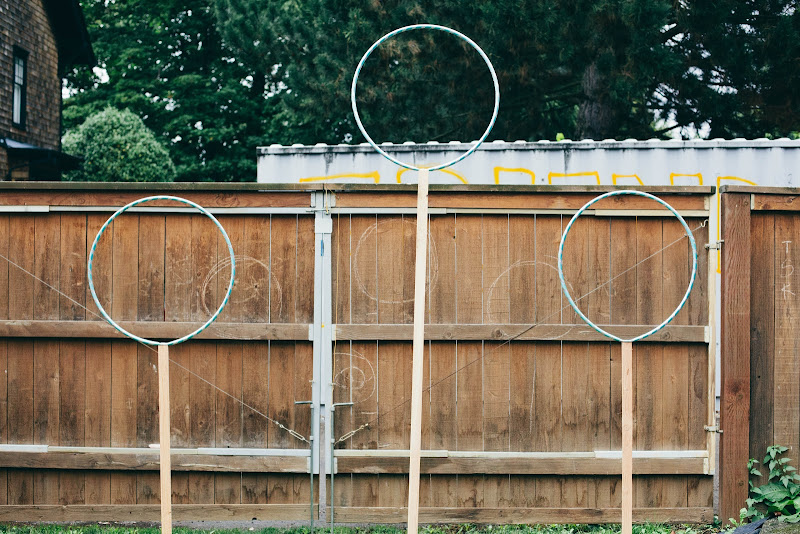 We set them up at either end of the yard and then Kei explained the rules of the game. I have no idea what he said because I had to set up for the next part of the party. When I went out to check on progress a few minutes later there seemed to be some method to the madness. 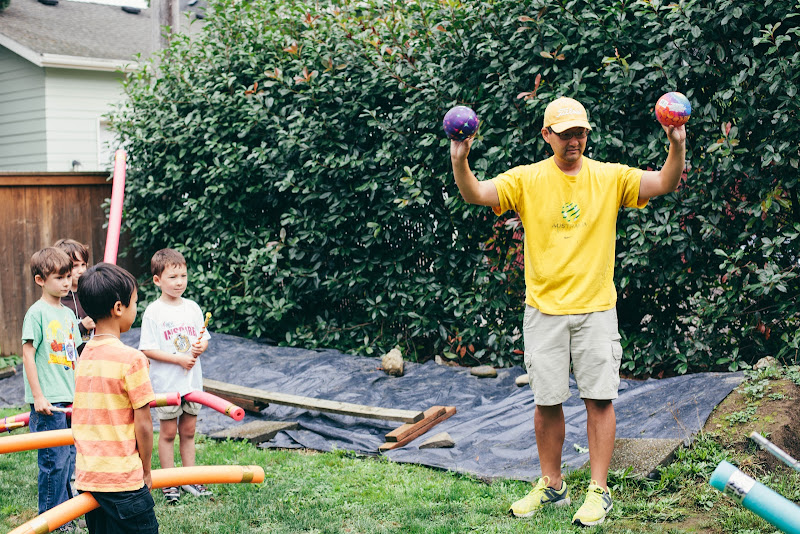 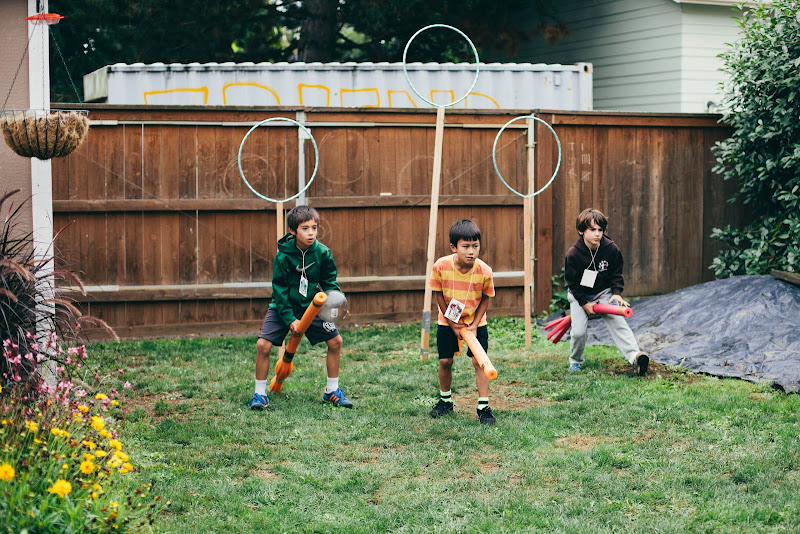 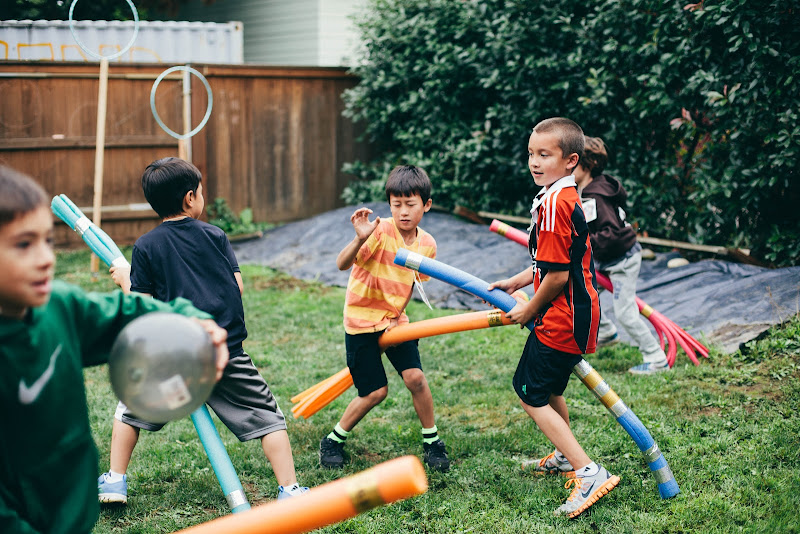 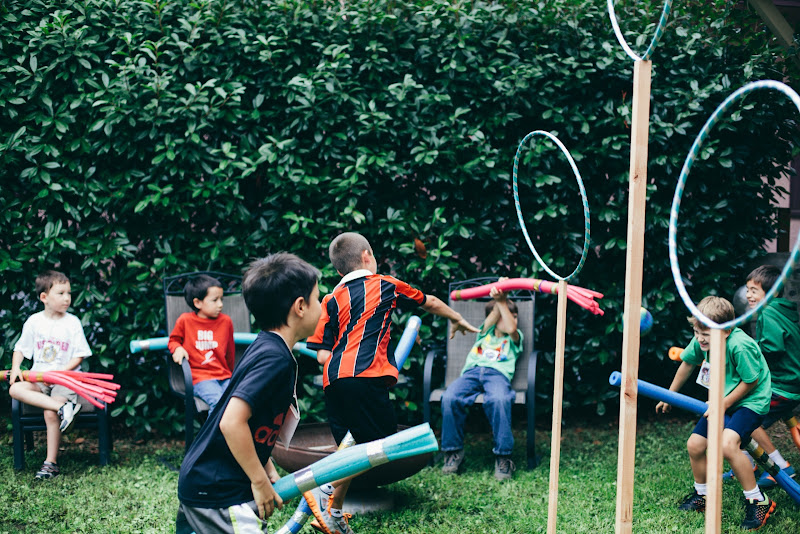 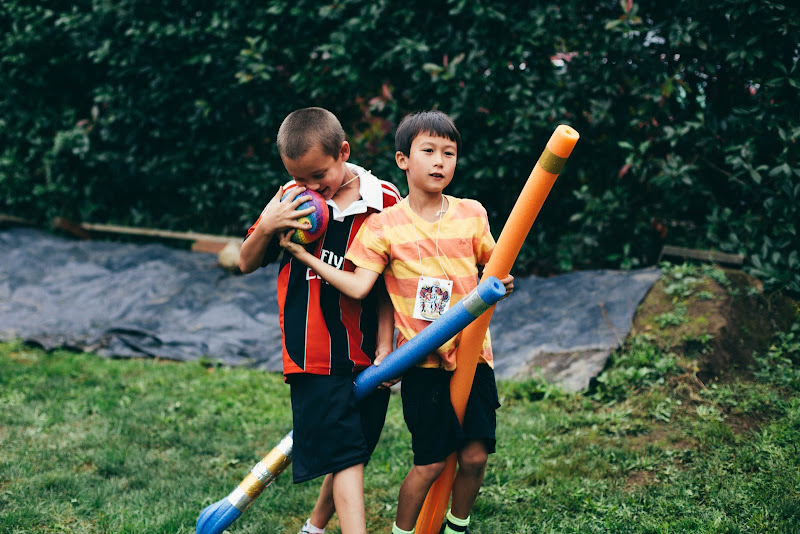 While the boys were out playing Quidditch, I was inside setting up Honeyduke’s sweet shop. I found some really cute lolly/candy labels online and bought candy to match. The hardest part was keeping the boys outside until we were ready to open the store. Originally, the plan was to let them go through and fill their own candy bags but I decided that it would be better to have an adult manage the process. Still, they were able to choose the candy they liked and skip those they didn’t – although I wasn’t prepared for any child to say they didn’t like chocolate. It was shocking. 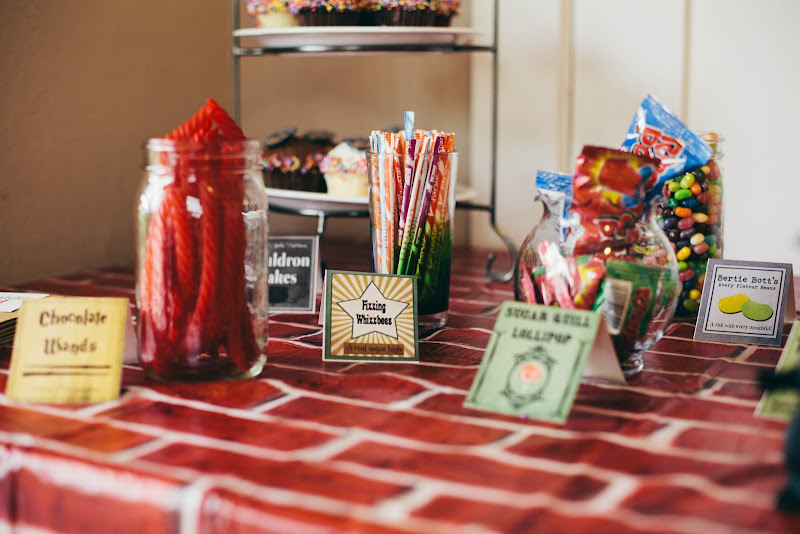 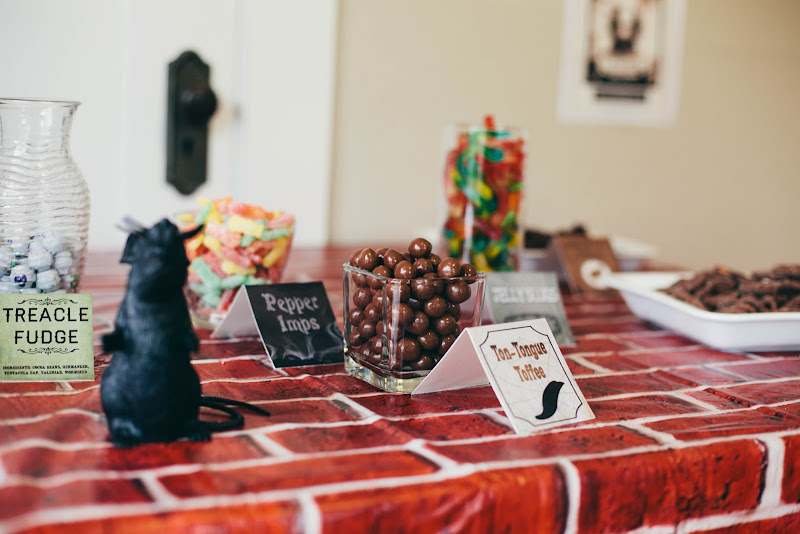 After Honeyduke’s (or was it before?) we had birthday cupcakes (cauldron cakes) and magic potion drinks while Thomas opened his presents.

Finally, with about 15 minutes left until pick up, we decided to let the boys come down off their sugar high by watching the first few minutes of the Sorcerer’s Stone. After two hours we said goodbye to 9 happy guests along with their new broomsticks, magic wands and a bag full of Honeyduke’s candy.

All in all a very successful party for a very special eight year old – even if I did forget to take a group photo. (My idea for a photo booth was also abandoned due to time and resources). I’m not sure if we’d do it again simply because of the amount of effort involved for a two hour event, but Thomas had a wonderful time and that was the most important thing.

And now, after I take a very long break, I’ll need to start planning a party for a six year old. Rumor has it that this one has a new interest in Vikings. What’s the Viking equivalent of Quidditch?