This year’s trick-or-treat included a Viking, a second year Harry Potter and my trusty old witch hat (although I switched out the tights and wore a different black dress). The best part about our costumes was that they almost didn’t cost me a cent. Samuel was quite happy digging in the dress up box for the cape and shield (a christmas present last year), while Thomas didn’t seem interested in choosing a costume and so defaulted to last year’s Harry Potter cape that no longer drags on the ground. My only costumes purchases were the new purple-striped tights and a Viking helmet that I bought for about $4 from a local toy store (easily the BEST $4 I’ve spent in a long time). That’s just how I like my Halloweens – cheap and easy.

Before there was trick or treating, however, there was school Halloween parade. One child got fully into the Halloween spirit while the other decided that he didn’t want to wear his costume in the parade because people always point and stare at him and say he’s Harry Potter. I tried to explain to Thomas that this must be how the “real” Harry Potter feels  and could be part of getting into character, be wasn’t having it. Instead he spent all day answering the question “who are you dressed as?” with “myself”. 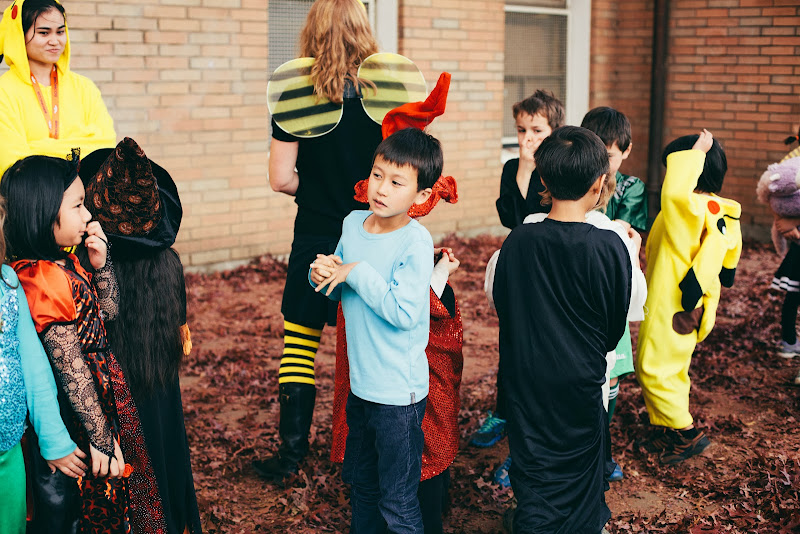 Parents of five-year-olds, a tip. Enjoy taking photos of your children now because, by the time they turn eight, getting them to even look in the direction of the camera is next to impossible. Thomas spent a good 10 minutes hiding from me while Samuel turned the corner and gave me this: 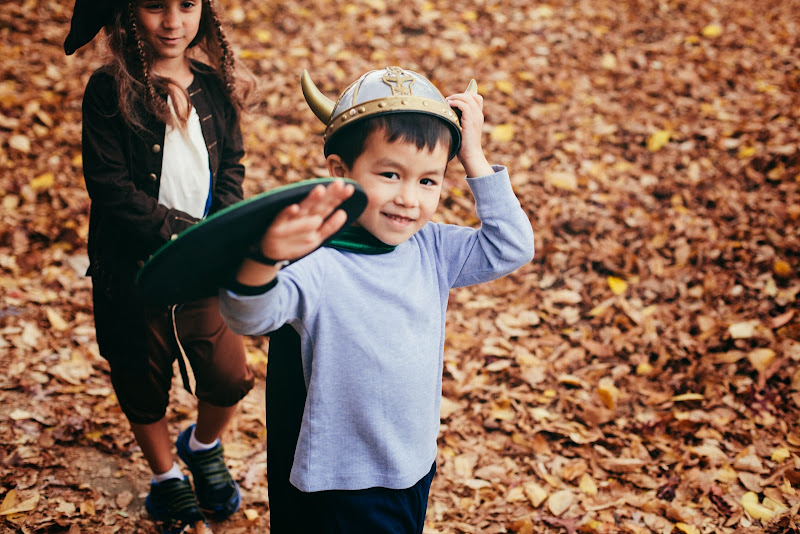 Later, after a classroom party and a short period of time where I tried to get some work done with the kids at home, Harry was reunited with Hermione… 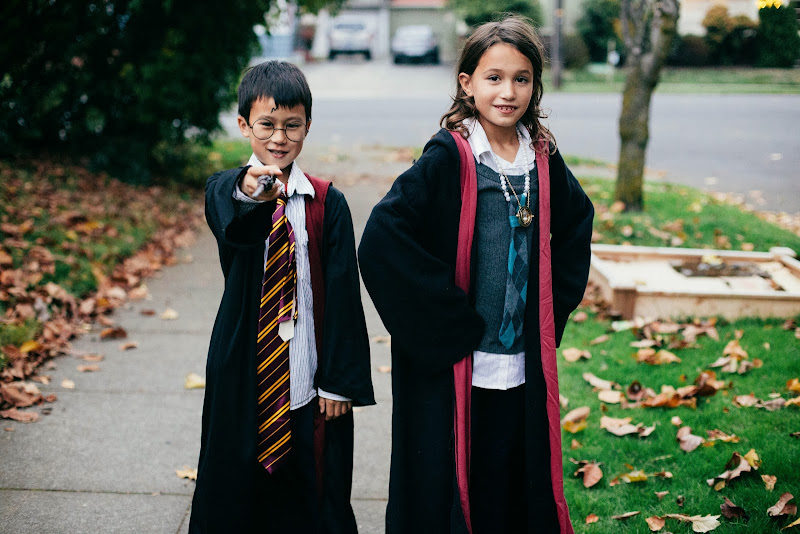 …and a few other characters… 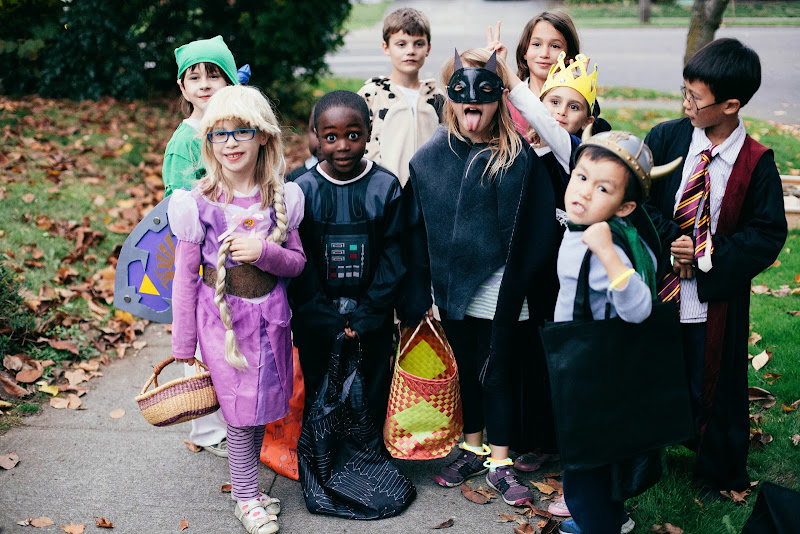 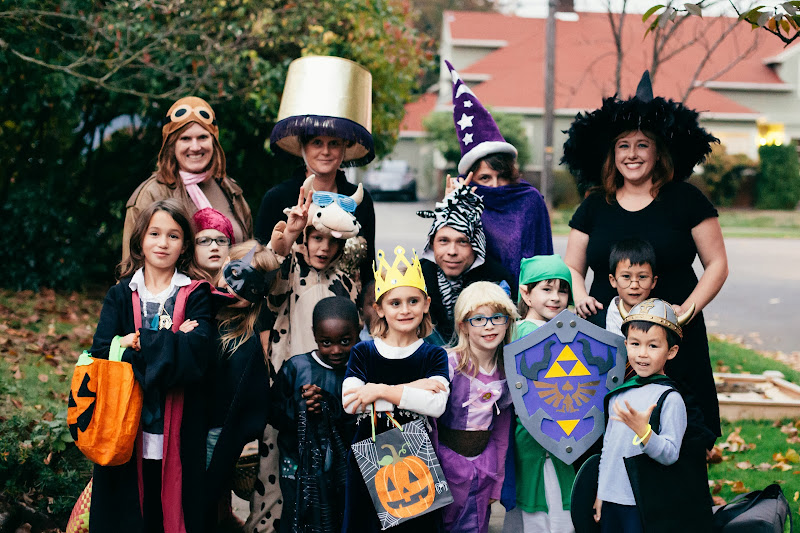 And then we walked around the neighborhood like one giant pack of misfits.

Love the pumpkins on this porch. 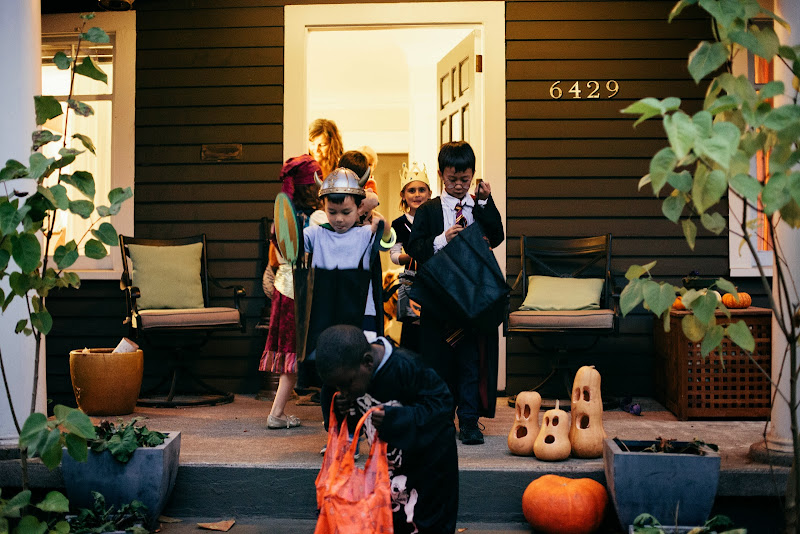 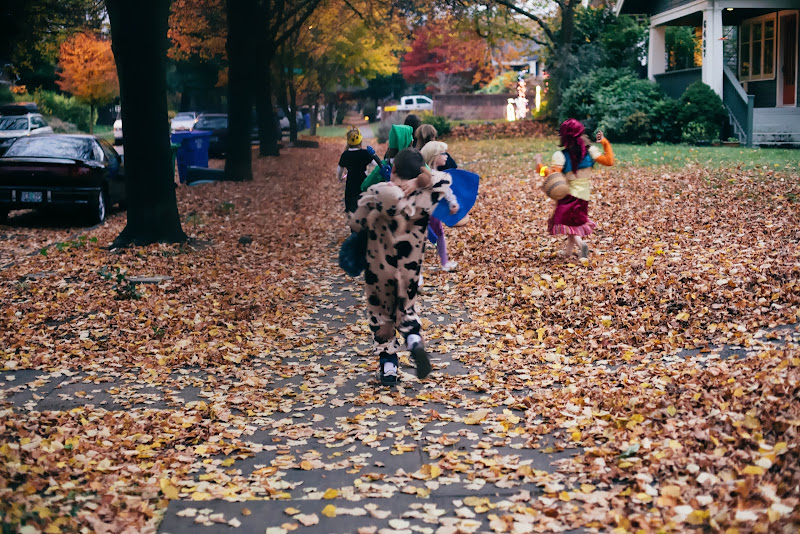 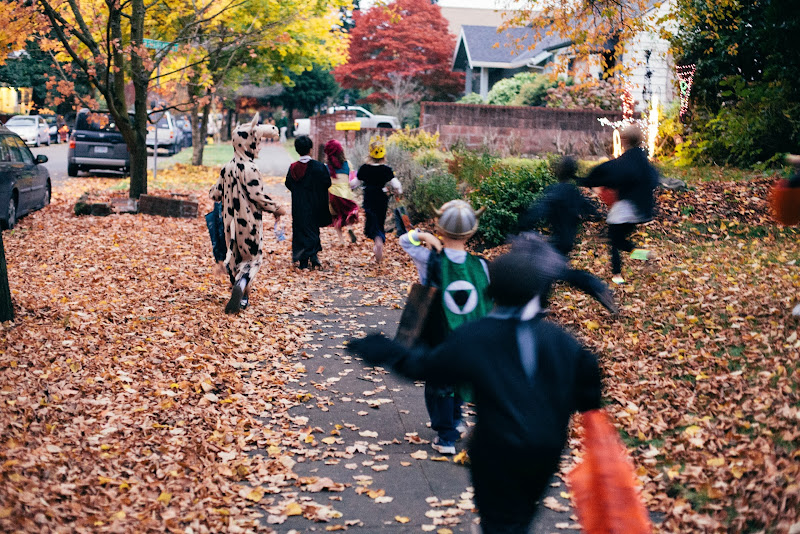 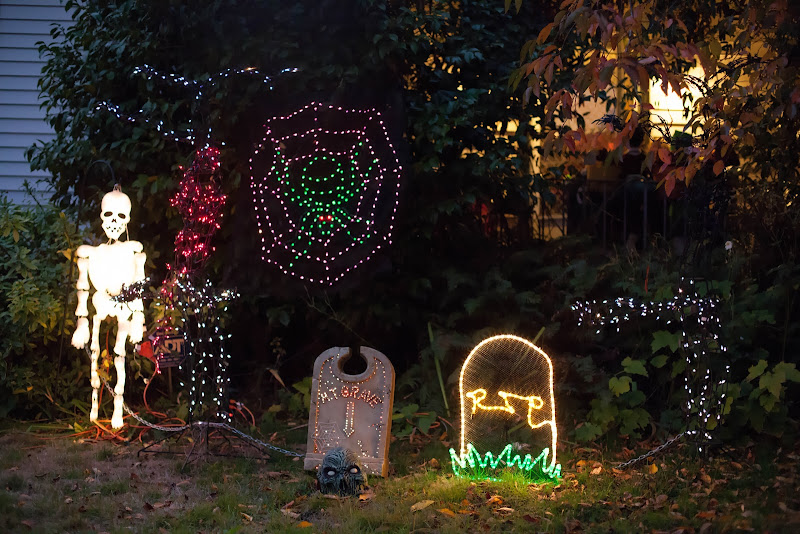 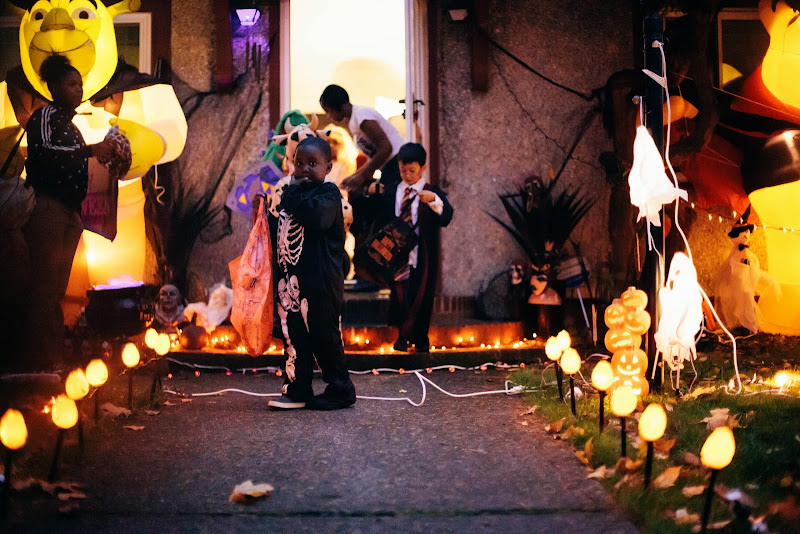 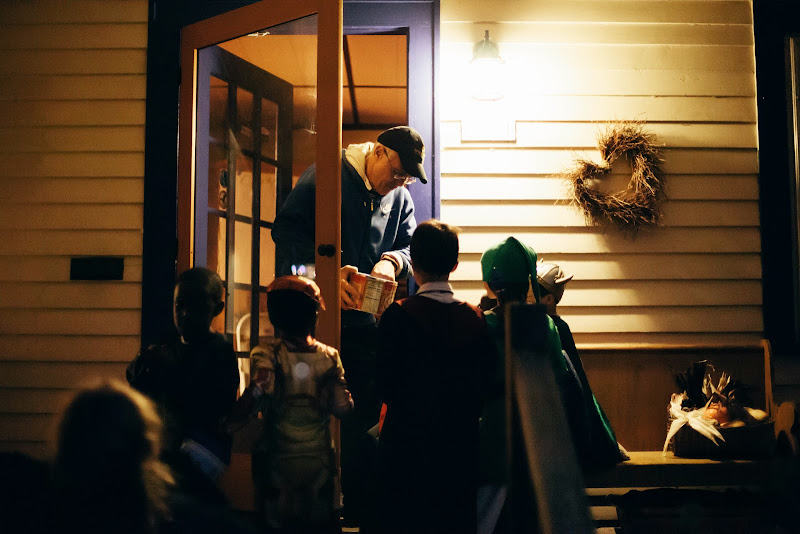 I headed home after a few houses to start handing out candy. Mostly, I volunteered because my witch shoes are not made for long walks around the neighborhood.

This crew knows that they have to pose for a photo before they get any candy at my house. Samuel helped me hand out candy later and I had to explain that I don’t require a photo from everyone who comes by. I don’t want to be known as THAT weird neighbor. 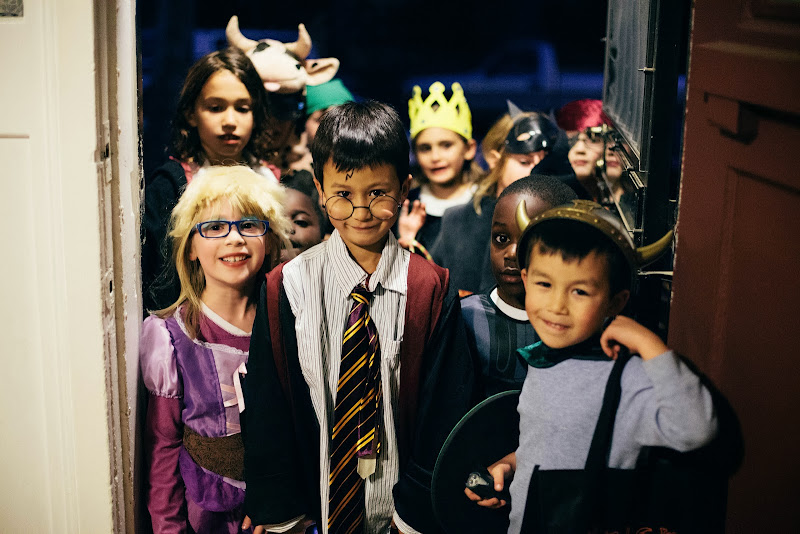 We turned the light off at about 8pm, but not before I remembered to take some photos of the pumpkins we hastily carved the night before. 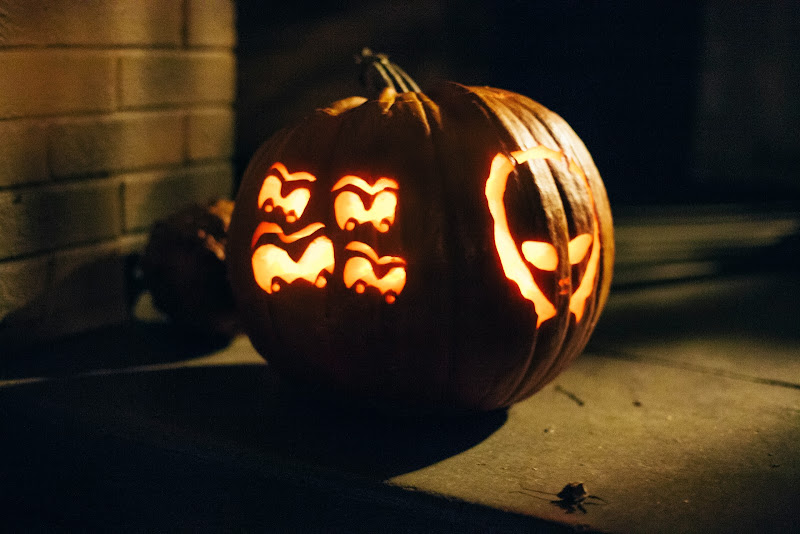 Someone posted a hand-written sign on our front porch next to the bird pumpkin the following day saying we won second place in the pumpkin contest. I think they made a mistake, though. Kei carved the bird and, clearly, my ghostly eyes and alien were far superior (and I carved TWO designs). Maybe they lost my first place sign. 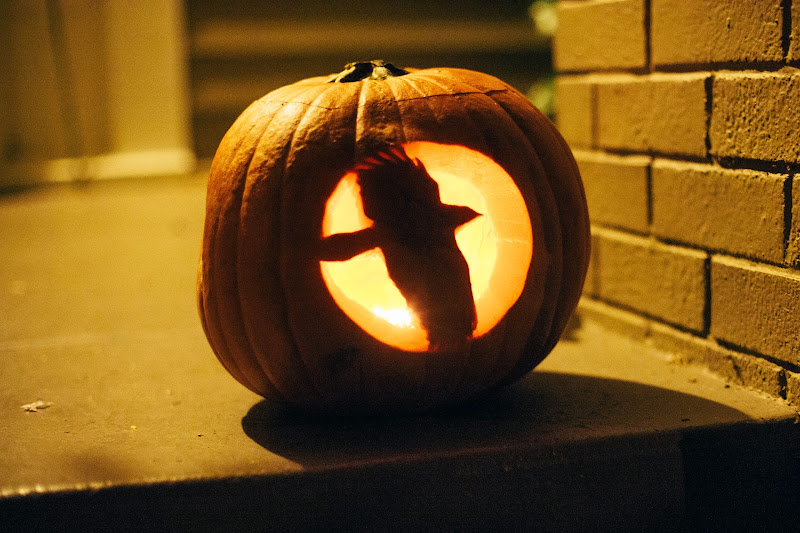 And that’s a wrap for Halloween 2013. Many thanks to the weather gods for keeping the skies warm and our costumes dry. 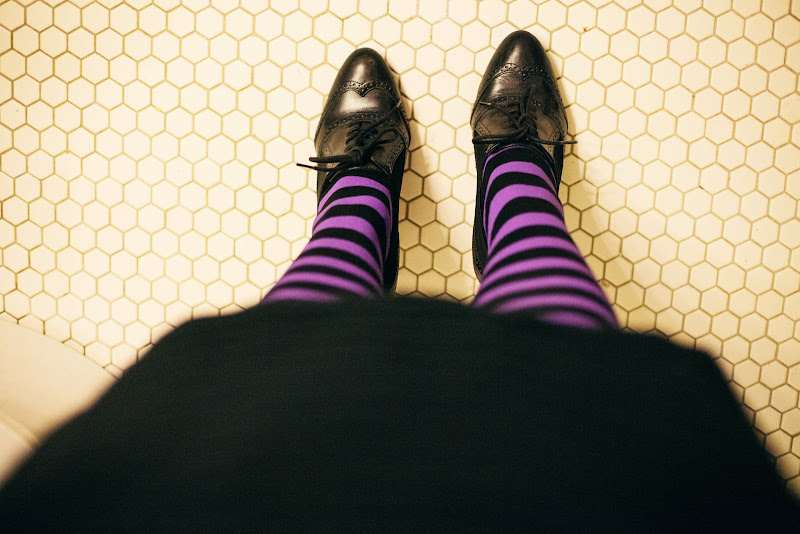 This entry was posted in Holidays, Photography, Portland, Samuel, Thomas and tagged Halloween. Bookmark the permalink.