So I know I said after the last post that I’d be back tomorrow but I needed to drop everything for a few days while I was in Seattle for work. It was a crazy busy insane week and I’m grateful to be on the other side of it – especially because the weather is sunny and warm on this side.

When I last left you, we had just hit the road after our Crater Lake boat tour and were headed into smoke-filled and HOT western Oregon toward the Oregon Caves National Monument. The drive was pretty, although a little longer than we anticipated.

Note: If you’re heading to the Caves and see a sign saying only 20 miles to go, don’t get too excited thinking that you’re almost there. That final 20 miles is one very windy, slow road and, in our case, peppered with constant questions for the back row of the mini van along the lines of “Do you feel ok, Samuel? Thomas, do you need a bag? Can I get you both some gum?” This once-bitten mummy was not going to be taken down by motion sickness if she could help it. In fact we made it to the very last mile before Thomas insisted that he get out of the car and walk. It was a close call but I am proud to say that this was a completely barf-free road trip.

We finally reached the historic Oregon Caves Chalet just before dark – a beautiful old building that transports you back to another time – one when guests played chess beside a roaring fire (minus the roaring fire part in the middle of Summer). 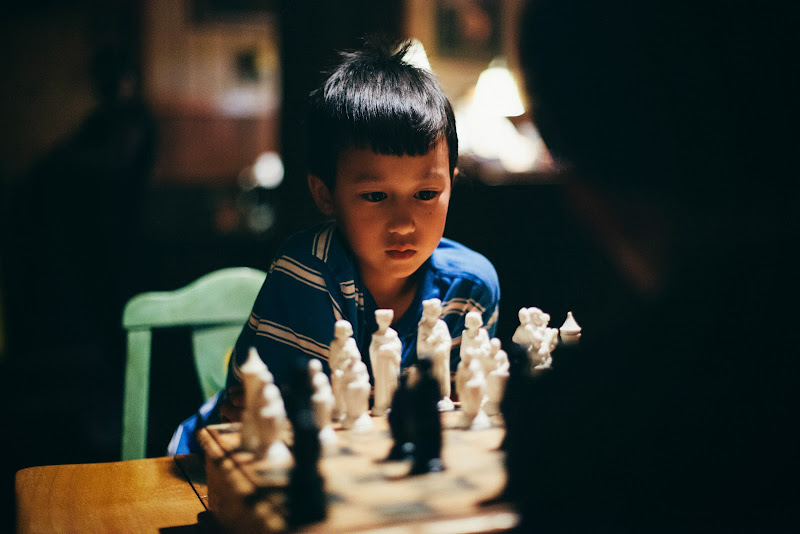 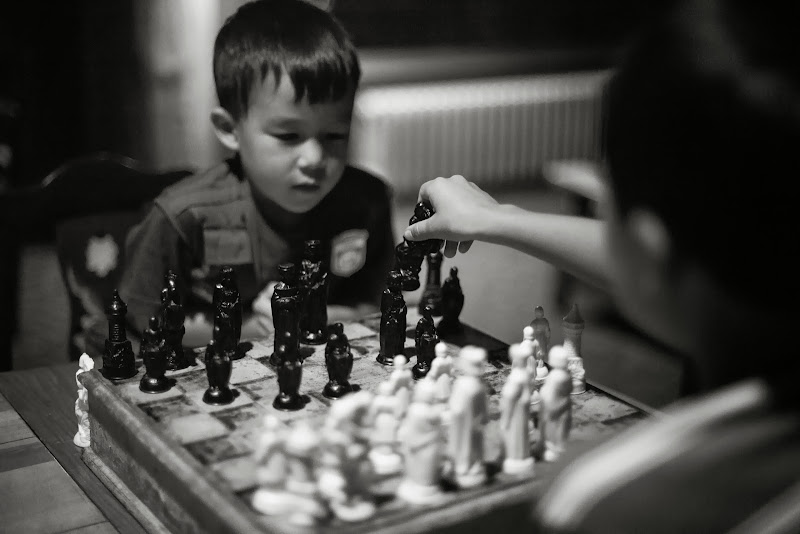 In my case, I also felt as though I had stepped onto the set of “The Shining” and it turns out that the Chalet was designed by the same architect who designed Timberline Lodge, the actual building that they used for all external shots in the movie. It was a little eerie. 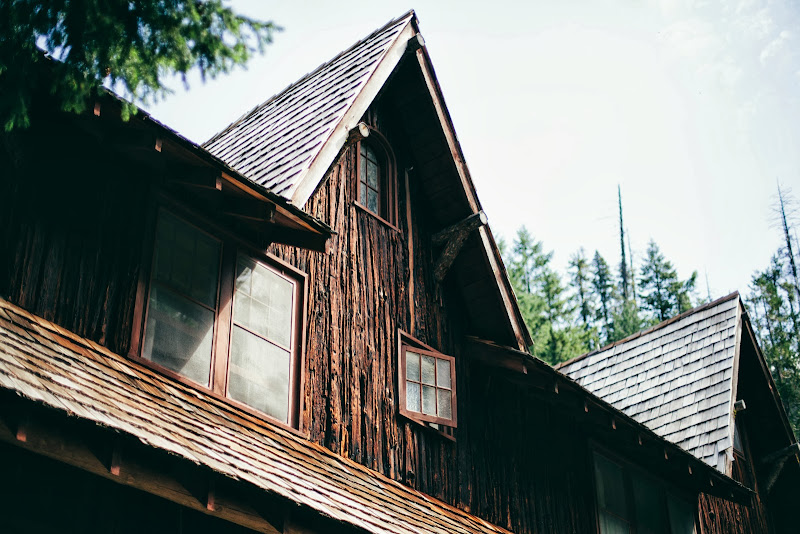 The Chalet is rests precariously over a ravine and suffers from crooked walls, old pipes and lack of any type of sound proofing, at least in our room. But it was quaint and fun for a one night stay and unlike anything we’d experienced before. 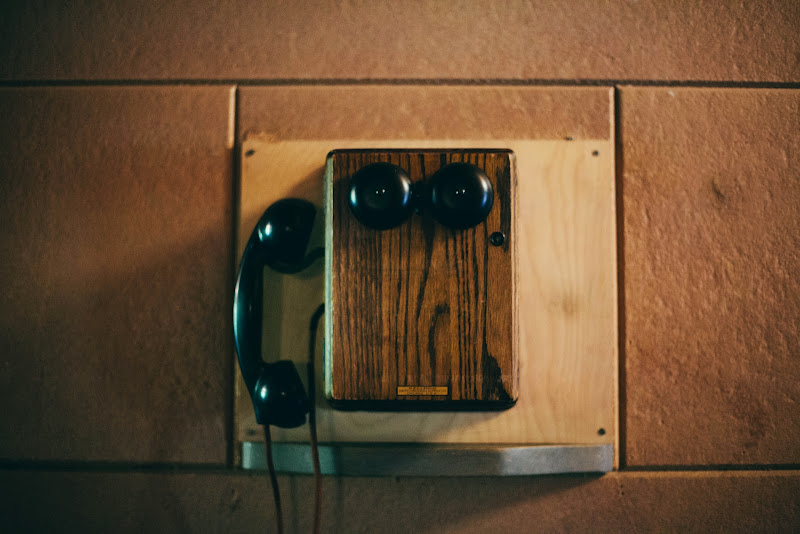 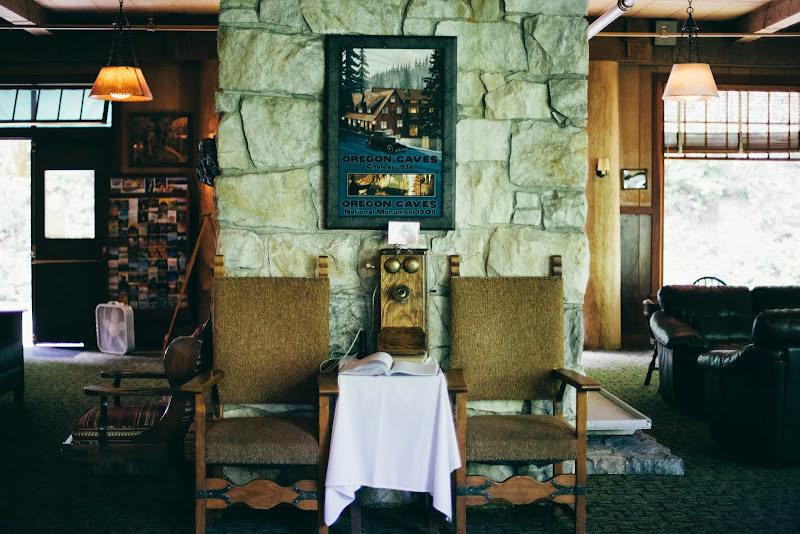 I fear that one day the entire building will collapse into the ravine unless a benevolent millionaire decides to throw some money at it. Though, not literally, because I think throwing anything at it would just weaken the structure.

When you walk through the hallways I found myself questioning my own sense of balance. Everything was slightly (and wonderfully) crooked. 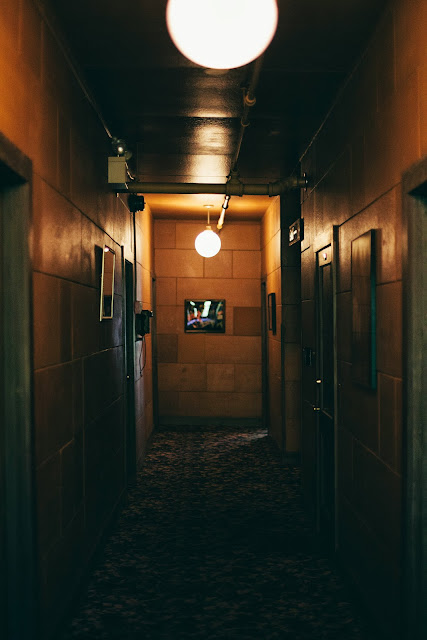 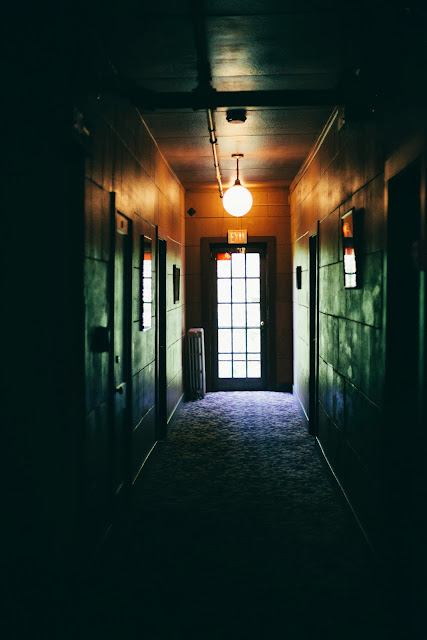 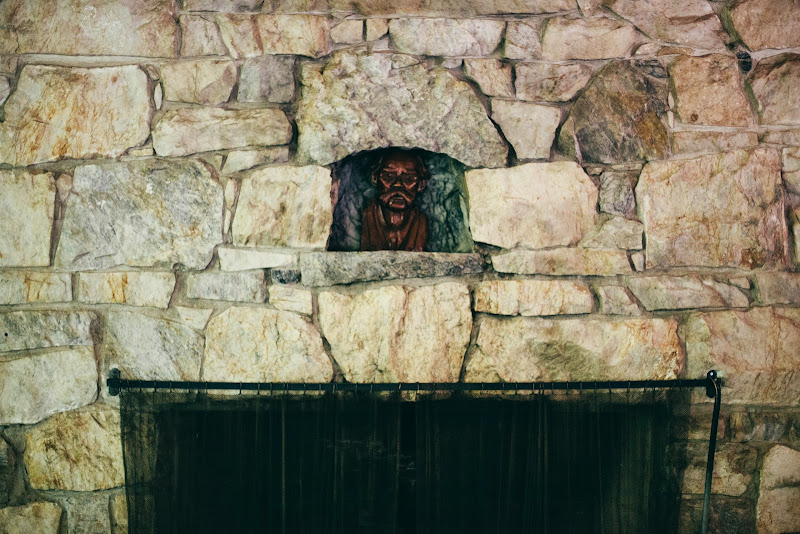 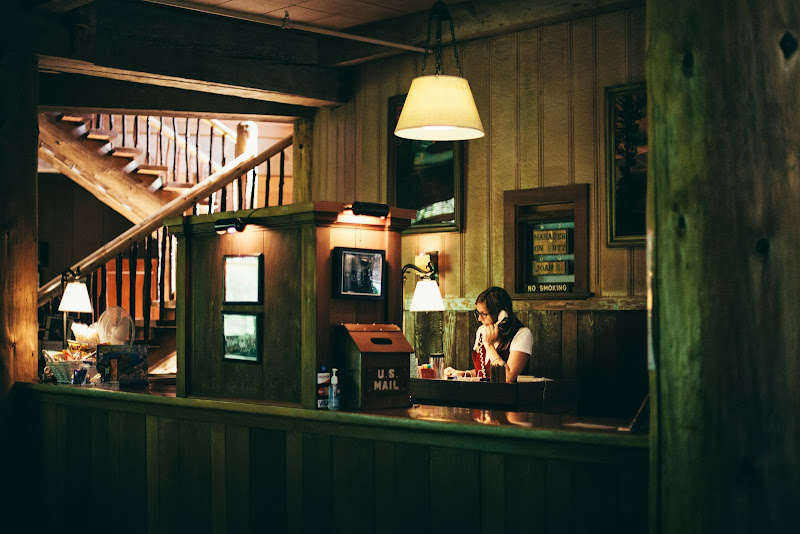 My Dad, Kei, Thomas and I took a tour of The Caves on our second day – although I don’t have any photos because I decided that my camera was too cumbersome and I took photos on my Dad’s camera but forgot to download them. Thomas and Kei exited the cave after the first section. Thomas wasn’t feeling well and it just became too much. It’s a shame because the second half of the tour was pretty amazing. I think Samuel could have done the tour as well even though they don’t recommend it for small children. There was another five year old on the tour and he didn’t have any problems at all.

Dad and I emerged from the cave after a couple of hours to find Thomas and Samuel earning a new Junior Ranger badge. Samuel also scored a hat to complete his full Junior Ranger uniform. 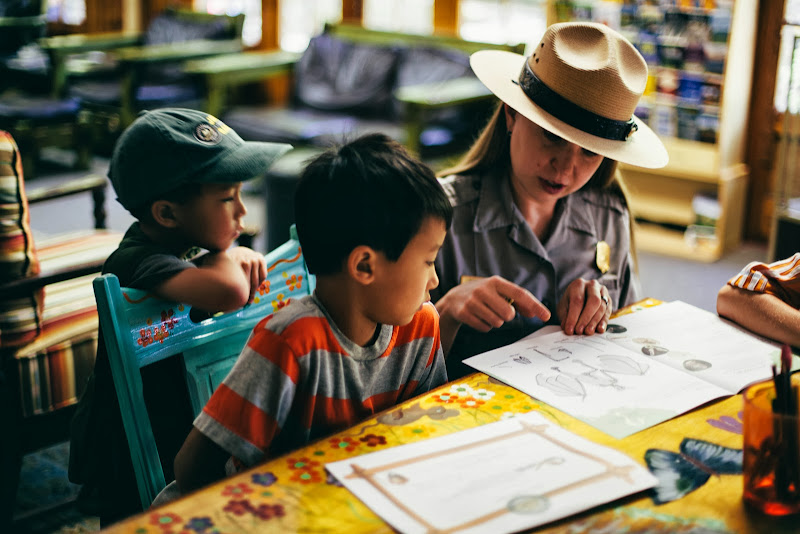 And then there was just enough time for a few photographs before we were headed on the next leg of our adventure. 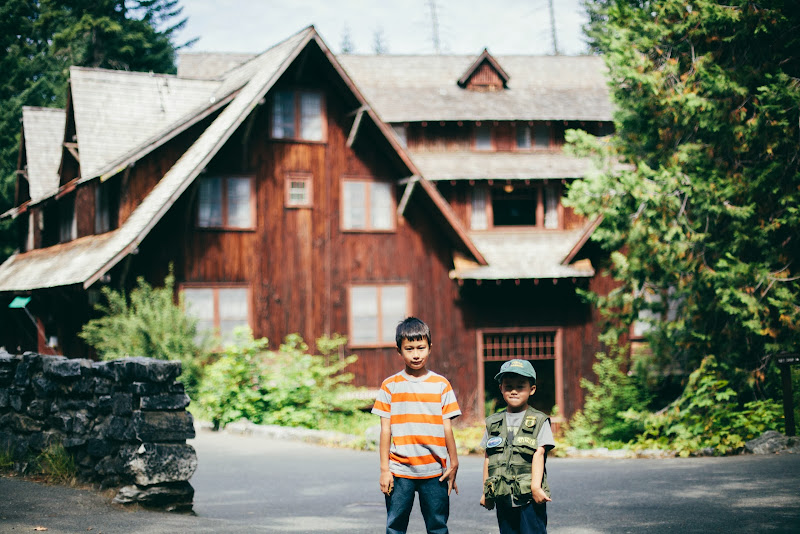 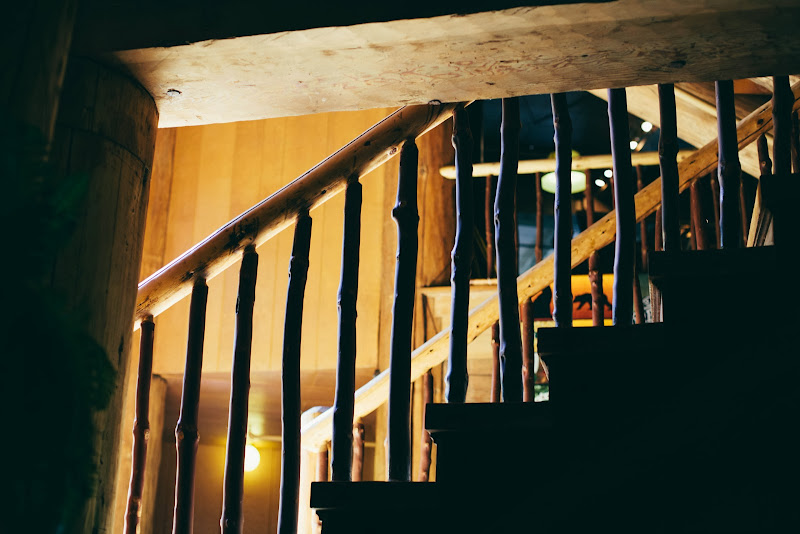 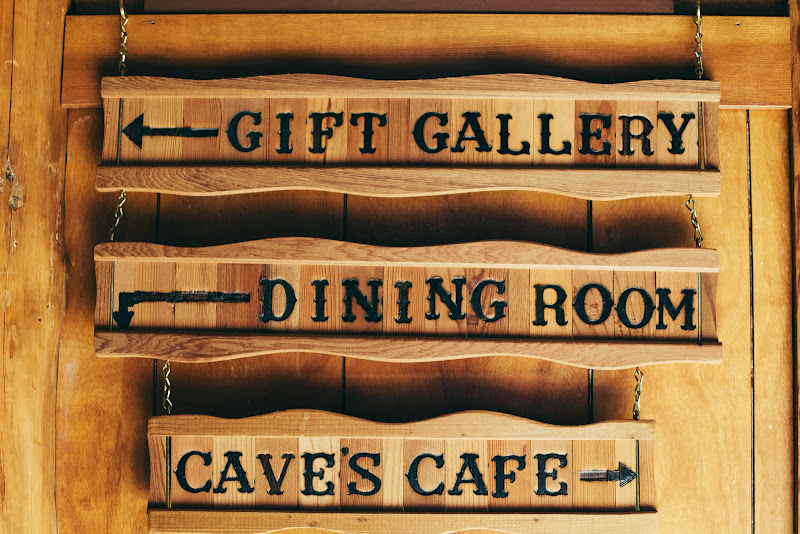 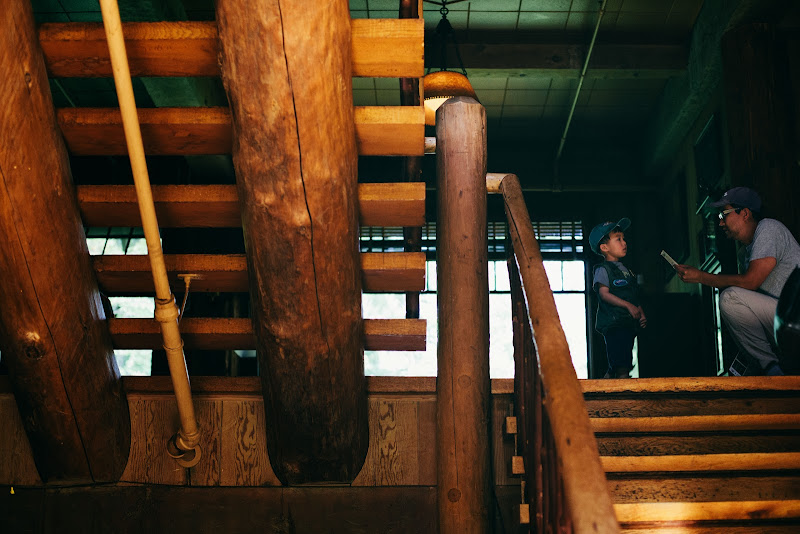 I can’t believe I almost missed the Caves Cafe. It’s hidden in the basement of the chateau and feels like a transportation back to the 50’s. I half-expected Fonzie to walk in and hit the jukebox. 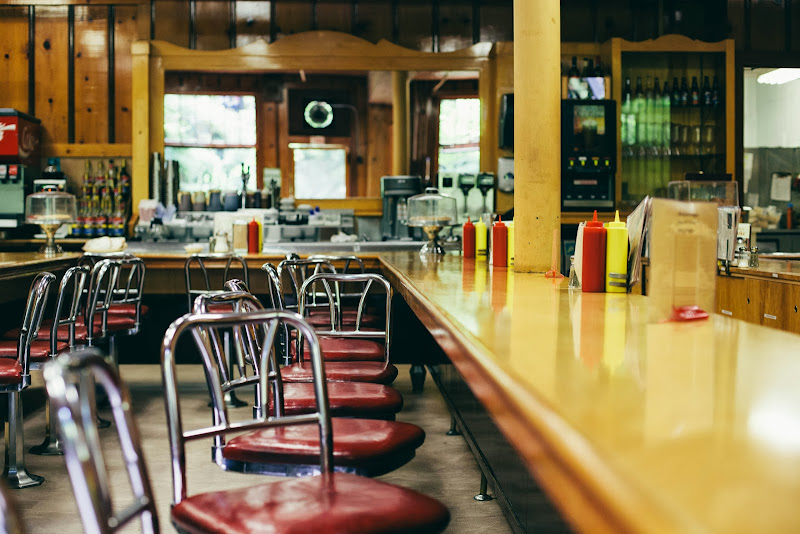 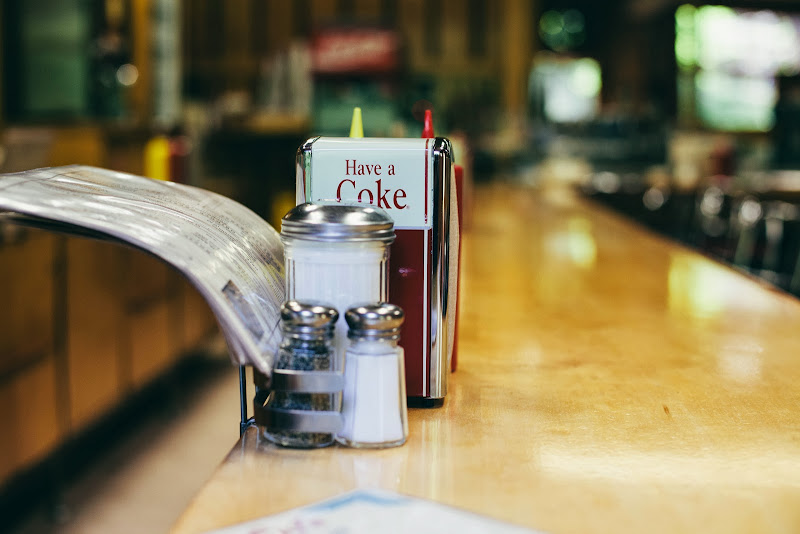 But, alas, there was no time to enjoy a milkshake – probably a good thing given the windy drive back down the hill.

The Oregon Caves was definitely worth the detour. Next time I’d allow enough time to eat at the Caves Cafe and make sure everyone is well enough to do the full cave tour. I’m so grateful that we had the opportunity to take this short trip back in time.

Next: Northern California, here we come!