We spent three nights in Sunriver before embarking on the next part of our adventure.

For years, Kei dreamed about a visit to Crater Lake but I didn’t share his enthusiasm. Here’s what I knew about Crater Lake before we went: It’s a long way away and fairly remote, closed for 6 months out of the year due to snow (snow equals cold) and has limited (and expensive) accommodation options.

And here’s what I learned: It’s really not that far from Portland and even closer if you’re coming from Bend, if you’re lucky then you’ll enjoy the lake on a sunny 80 degree day in the middle of Summer and the accommodation is not fancy but worth the convenience of staying close to the lake.

It’s also an incredible place and quite unlike anything you’ve ever seen before.

We headed out from Sunriver early in the morning, stopping along the way to pick up some sandwiches from the grocery store and stop for a photogenic train. 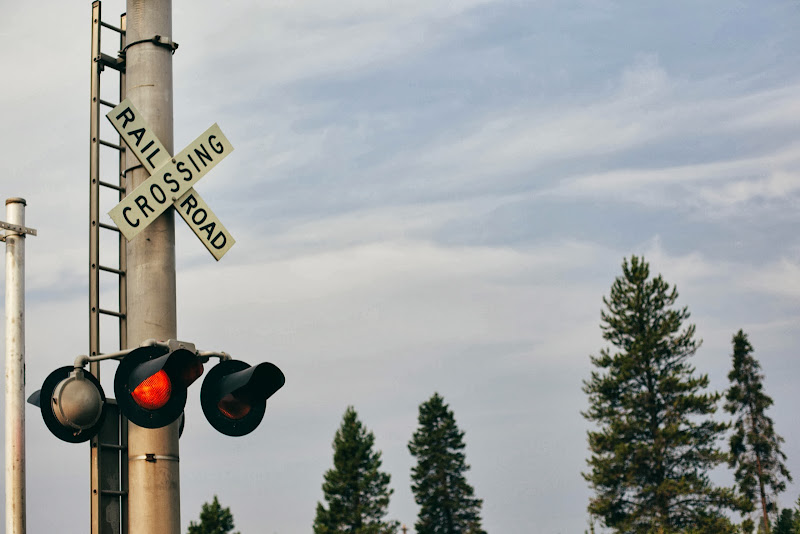 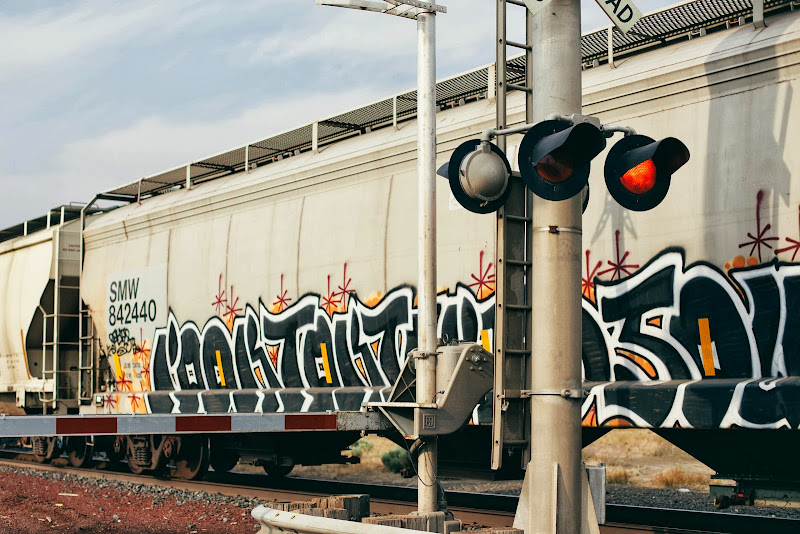 Google (or maybe I) miscalculated the distance so, what we thought was going to be a 4 hour trip, turned out to be just a 2 and a half drive to the north park entrance. 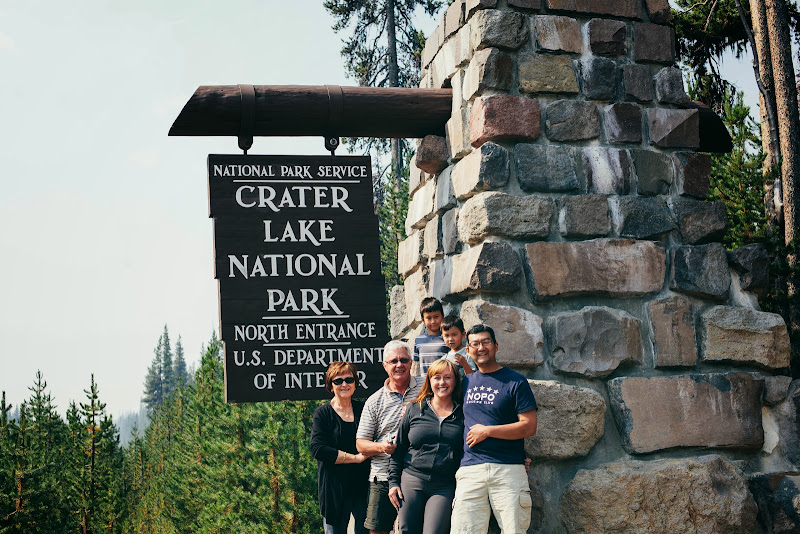 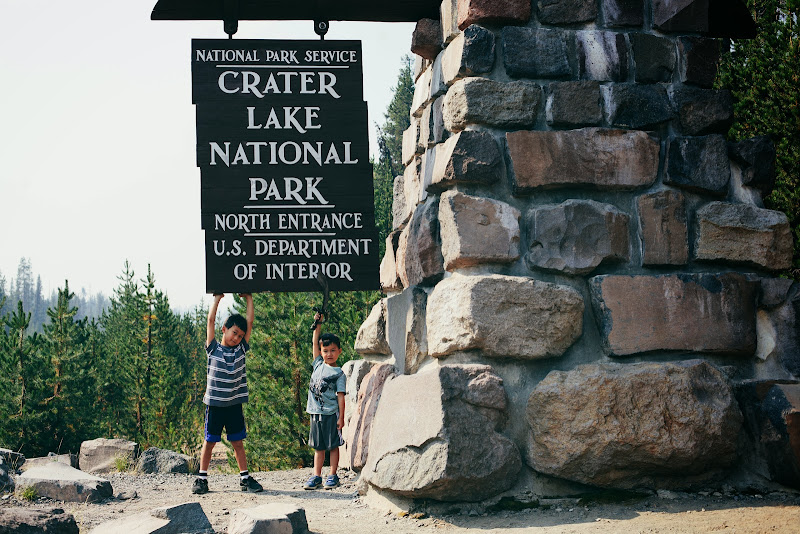 Then we drove just a few more miles to our first view of the lake and it was, well, underwhelming. It turned out that fires burning in the western part of Oregon had filled the lake with smoke so, instead of the deep blue waters that we had expected, our view looked something like this… 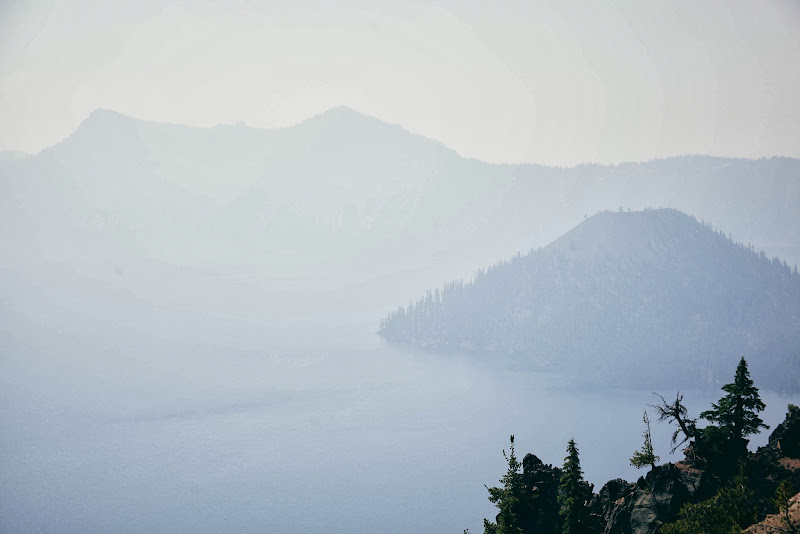 Beautiful, sure, but as impressive as I’d hoped. Still, we made the most of our first stop by walking alongside some poorly constructed fences. I mean,  would they really stop, say, a five year old from plummeting over the edge? I spent a lot of time saying “stay back from the edge” and “don’t run!” (Between photographs, of course) 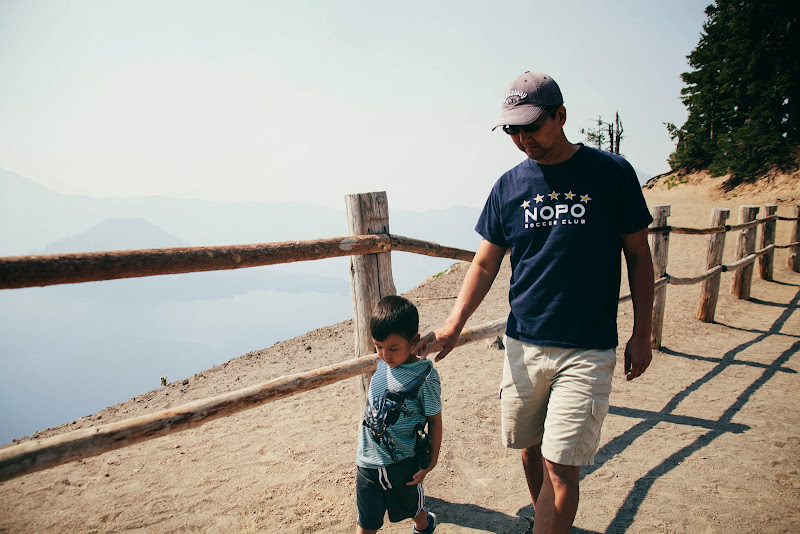 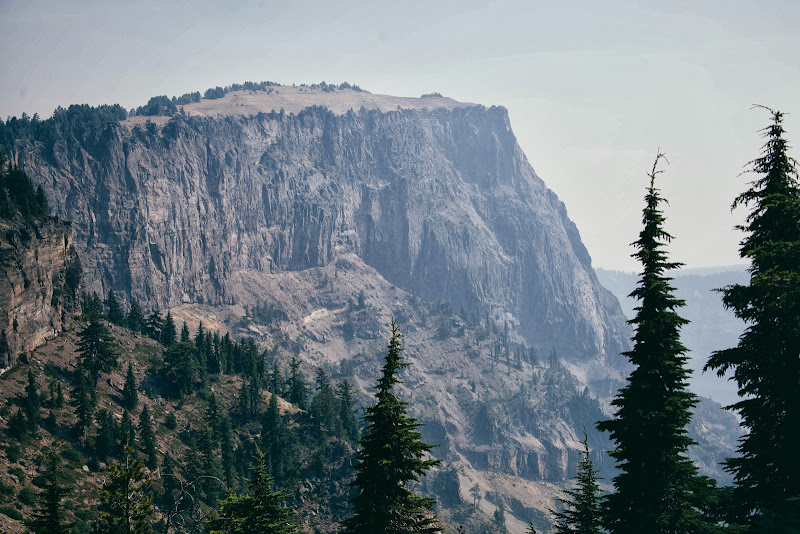 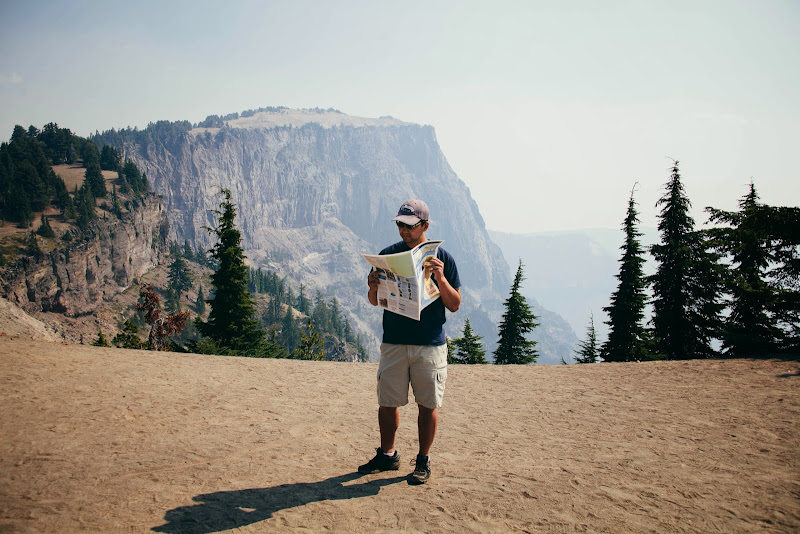 The kids soon found some tree stumps to climb (I was happy as long they weren’t climbing fences). 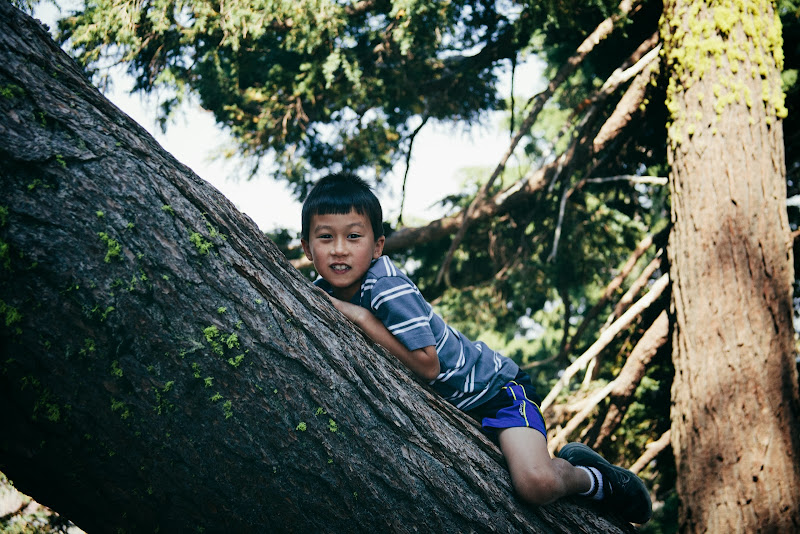 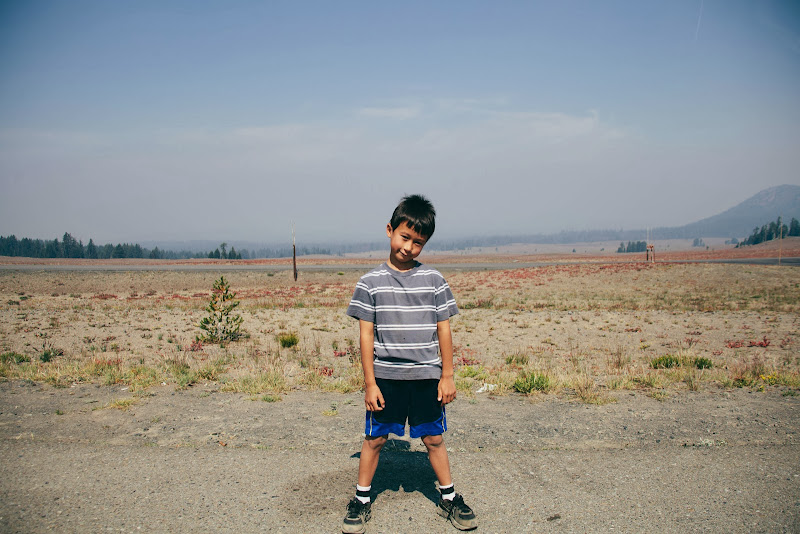 And then we jumped back in the car to drive 20 minutes to Rim Village… where the smoke parted and I began to understand why people make such a big deal about this lake. 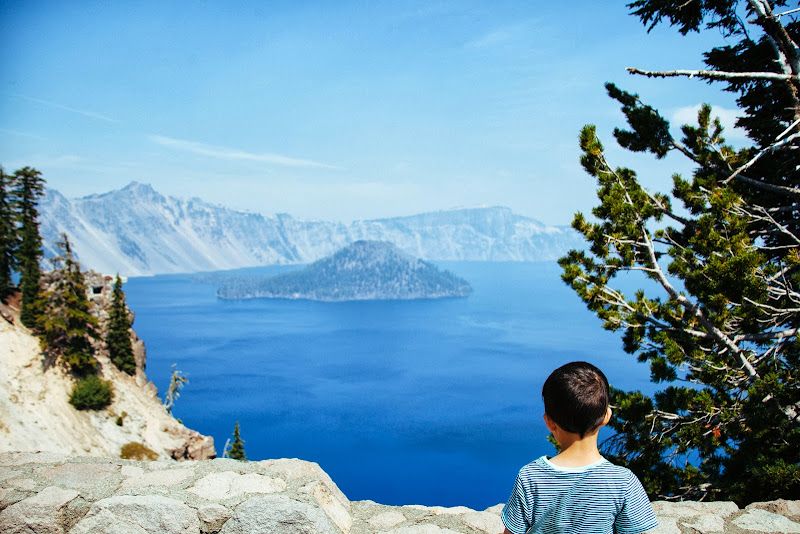 That teeny tiny white thing in the middle is a tour boat. 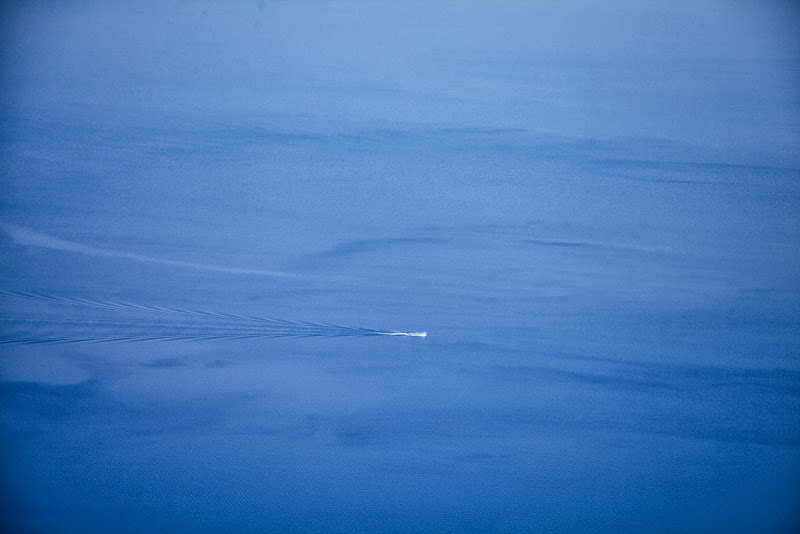 After lunch, we went for a walk to check out the Crater Lake Lodge, a beautiful old building that perches on the edge of the cliff. And I found myself wishing that I had booked our trip earlier so we could have stayed in this wonderful place. 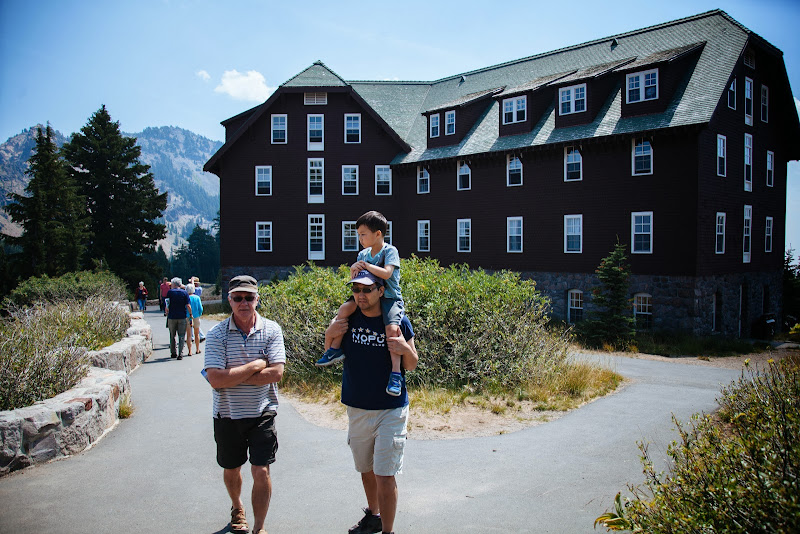 Alas, it was not meant to be so we made do with taking in the view from the rocking chairs that sit out front. 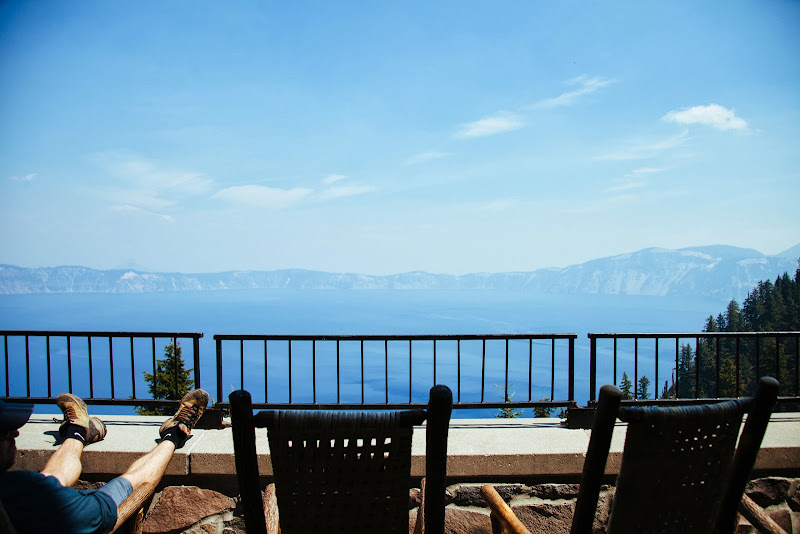 After using the facilities we walked back to the Ranger Station and gift shop (*there’s always a gift shop). It was here that we made easily the very best purchase of the entire trip – a Junior Ranger vest for Samuel. I mean, this thing has pockets and loops and zippers galore. It was the uniform of choice for the remainder of the trip and was, literally, filled with rocks by the time we got home. 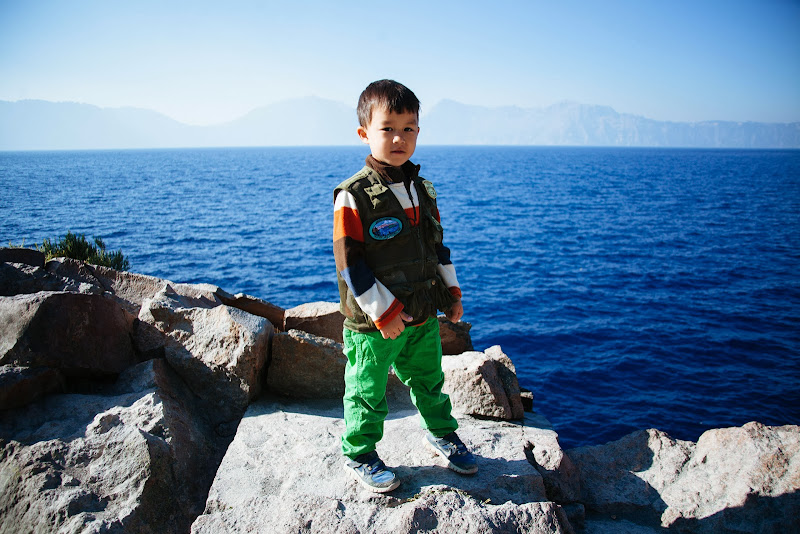 Thomas bought himself a book about birds of North America which he used as a guide to complete one of the Junior Ranger activities. 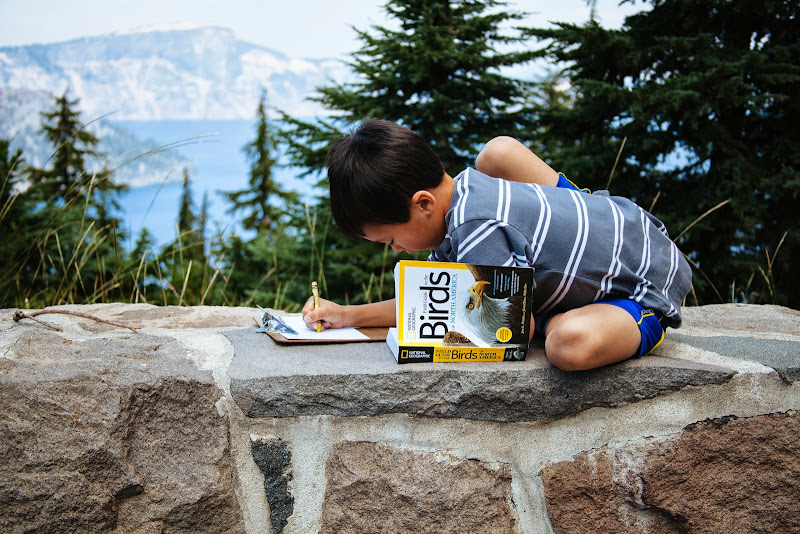 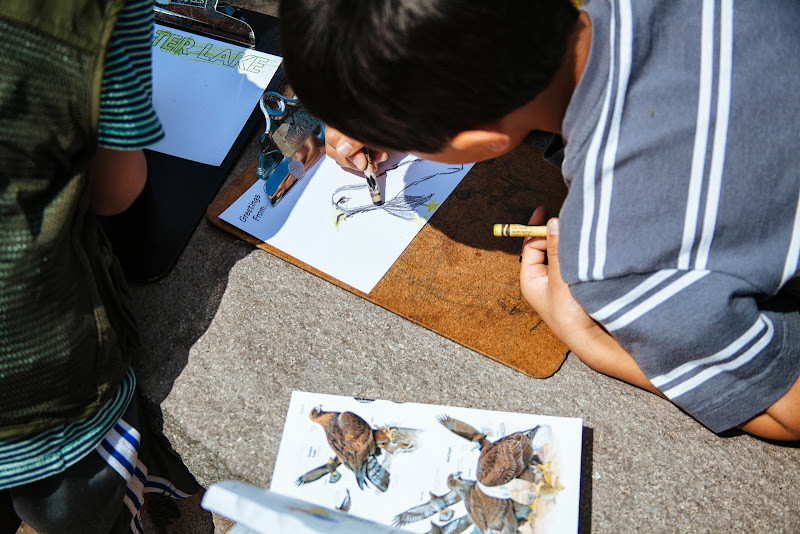 Let me just pause and say that the Junior Ranger program is fantastic. Kei and I had been to National Parks before but, without kids, you really don’t appreciate how much these rangers do to share their knowledge with the next generation. And they take their jobs as educators very seriously. My boys loved the chance to earn badges and were generally interested to hear about how the crater was formed and the wildlife that surrounded them. I’m now motivated to take them to as many National Parks as I can before they become surly teenagers. 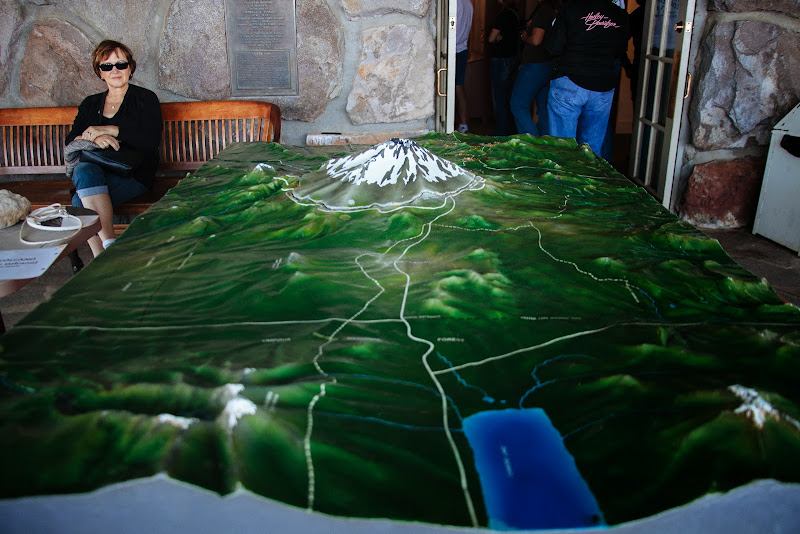 After we finished the Junior Ranger activities (it took a while), we spent some more time taking in the view. 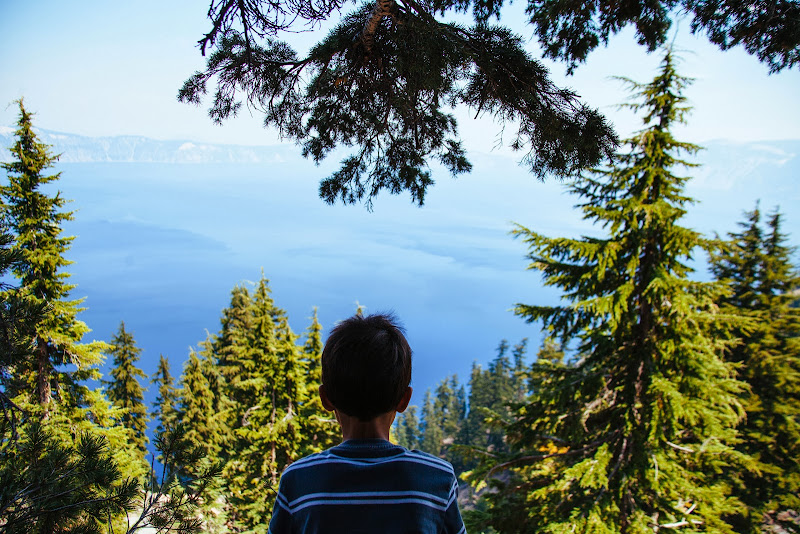 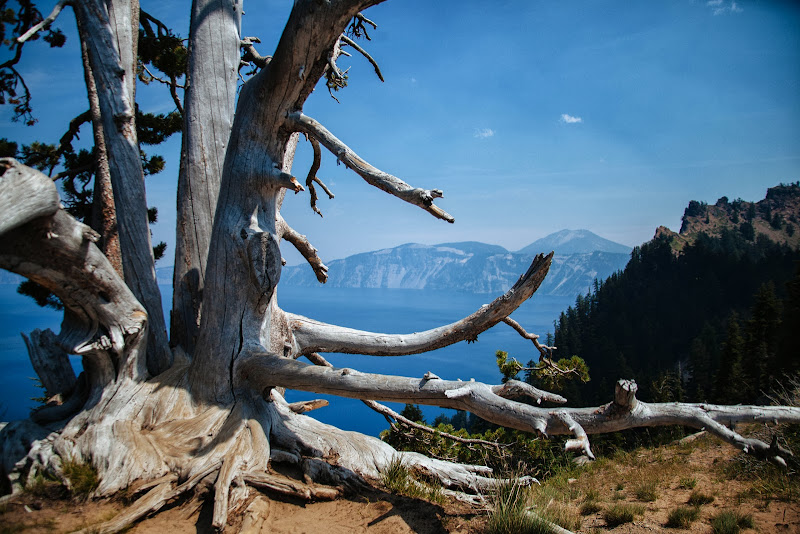 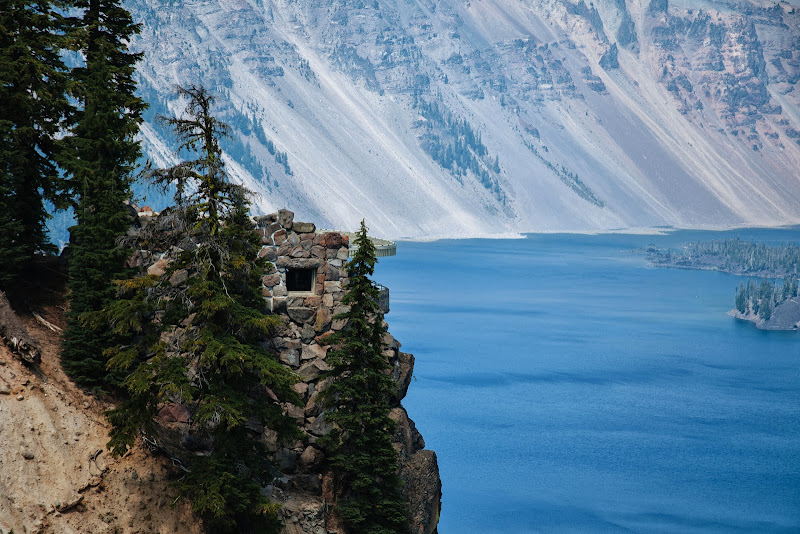 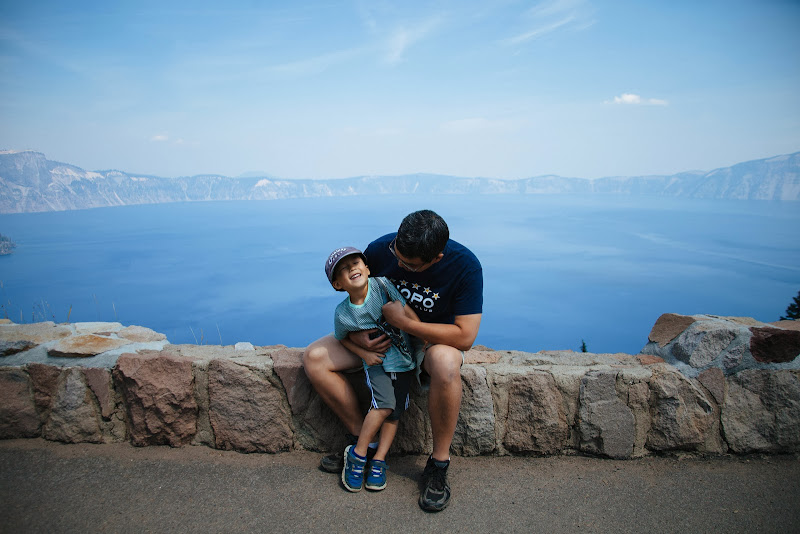 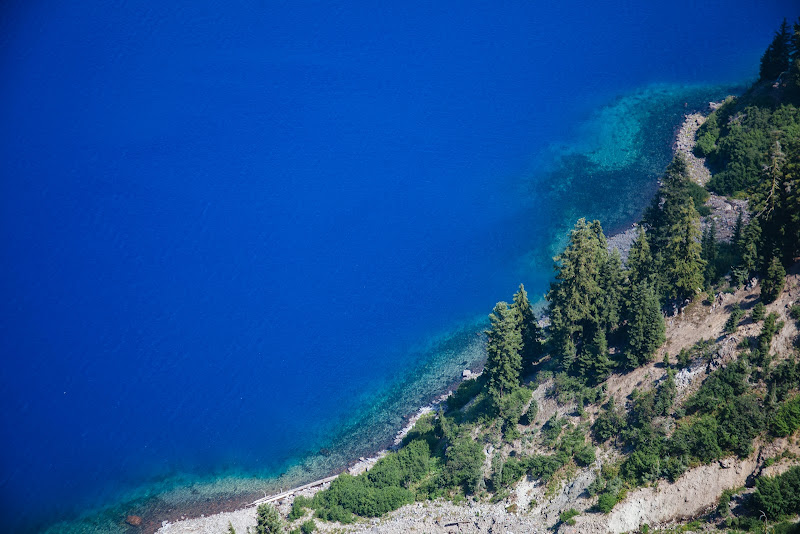 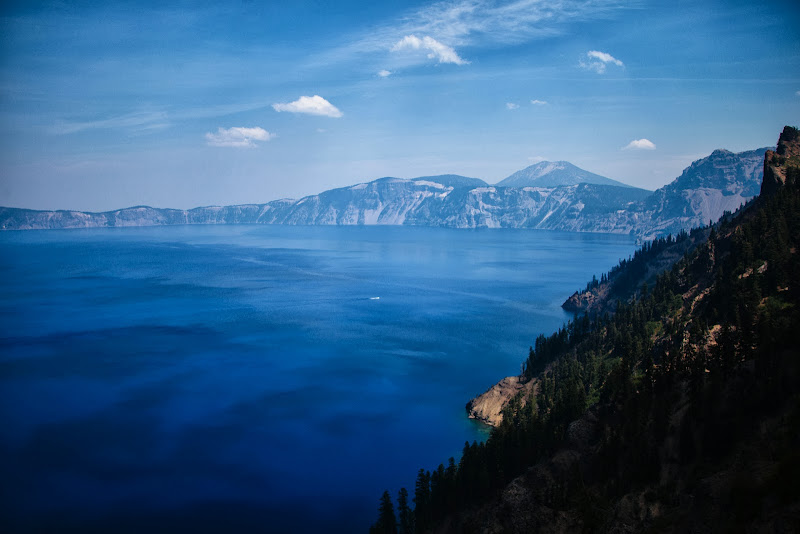 At this point a couple of the adult members of our group began to fade. It turns out that Kei had come down with a flu-type illness so we headed to our cabins at Mazama Village where he could take a nap and I could try and keep the kids entertained. I booked the cabins back in January which was lucky as it turned out because they fill up fairly quickly. The rooms were simple, but clean and comfortable and even came with complimentary wireless internet. Dinner at Annie Creek Restaurant wasn’t the best meal in the world but our choices were limited.

After dinner, Dad and I took the kids for a walk through the adjoining campsite to listen to the Ranger talk. Unfortunately a combination of my poor map-reading skills and the pitch black darkness meant that we weren’t able to find the amphitheater and spent a good 45 minutes wandering aimlessly through the campground until we gave up and headed back to the cabin for an early night. The boys were disappointed but I secretly thankful for an excuse to get them to bed knowing we had an early start the next day. 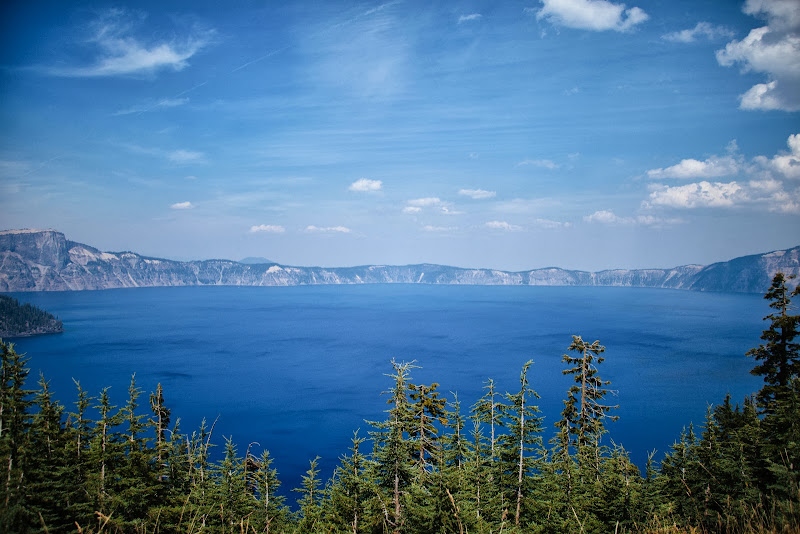