The boys and I made to Australia in one piece. We had a disastrous flight to Australia two years ago that involved delayed flights, being denied boarding, a forced 24 hour delay in San Francisco, having to fly United and, finally, some lost luggage, so I would be lying if I said I wasn’t just a teeny bit nervous this time.

Now that we’re safely in Australia, and I’m not in danger of jinxing myself, I’m thrilled to share the news that this trip was perfect. Every single flight was on time, I packed enough activities and movies to keep everyone relatively happy and the boys even slept for eight hours on the longest leg. I don’t think it could have gone better if I’d planned it.

So here’s the rundown of our trip with mostly iPhone photos, with a couple of DSLR pics thrown in. Most of the time I was too lazy to pull out the DSLR

1. Got to Portland airport at 2pm and stood in line forever to check our bags while people who checked their bags online moved through at a much faster pace. This is the only gripe I have about our trip (oh, and LAX but I’ll get to that). International flyers aren’t not allowed to check bags online, so why should we be forced to stand in a much longer line, with fewer staff to assist? OK, rant over.

2. Said goodbye to Kei at the security line that practically wrapped around the entire airport (slight exaggeration). Made our way to the gate and waited about 30 minutes before we were allowed to board while my children behaved like little angels. Here’s the proof: 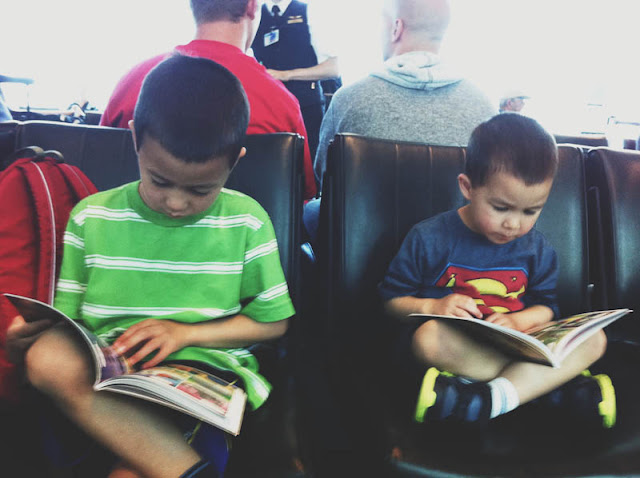 3. Boarded plane #1 to LAX. A quick 2.5 hour trip during which my children drew pictures, read books and continued their angelic behaviour. It was nothing short of miraculous.

4. Landed in LAX and discovered that we had to exit the terminal and catch a shuttle bus to the international terminal, check in again at the Air New Zealand counter and then go through security for the second time in less than four hours.

5. Made it through a surprisingly-short security line and browsed the pathetic selection of airport food. Decided on a Pizza and salad from Wolfgang Puck which was as good as you would imagine and then found a place to hunker down for a couple of hours. Side note: I’ve been through a lot of international airports an LAX is arguably the worst. It feels dirty and the amenities are pretty pathetic. Would have definitely preferred to fly through San Francisco but I was lured by the promise of a SkyCouch on the LAX flight (more on that in a moment). 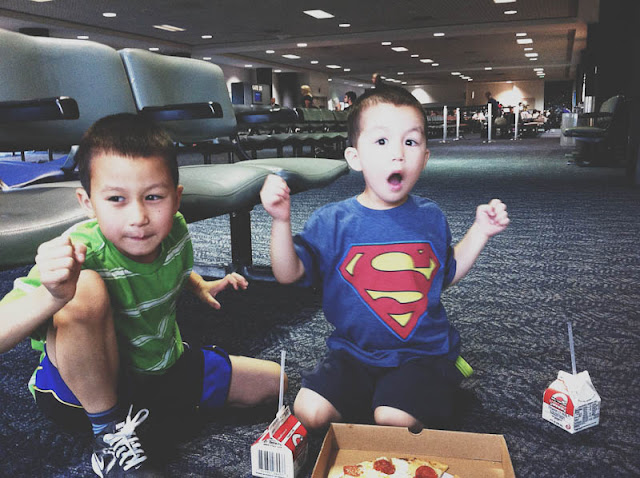 6. Let the kids watch a couple of episodes of Avatar: The Last Airbender during which time I was free to read a book (yes, even I am amazed by that last sentence). 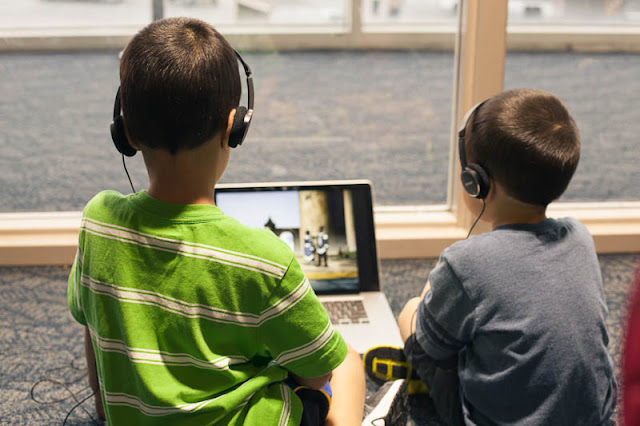 7. Boarded our 14 hour flight to New Zealand at about 9pm (on time). The kids were tired, but excited. Samuel kept asking if we were nearly at Australia but I had to break it to him that this was only flight number 2 and most of the trip still lay before us. He seemed a little disappointed but quickly perked up when he spotted his very own TV in the back of the seat in front of him.

8. Thomas was close to passing out from exhaustion immediately after dinner so we set up the SkyCouch. What an amazing stroke of genius to provide children with somewhere to sleep. While it wasn’t without its faults (hard to get to bags stored under seats, lots of kicking and jostling for room), the kids slept for a full eight hours. EIGHT HOURS! I slept for about four in a seated position, but it was enough to keep me going. 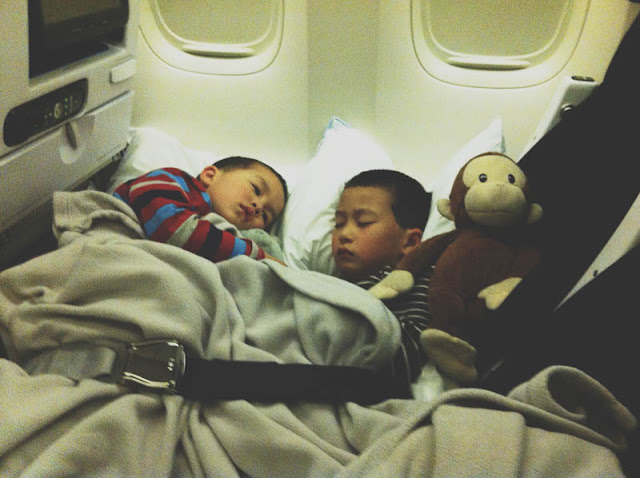 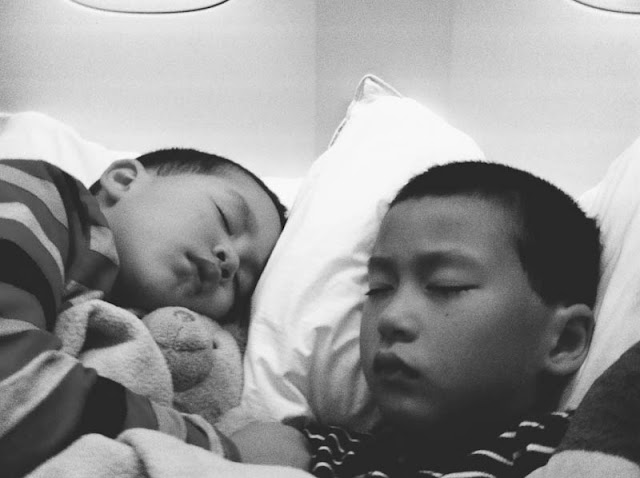 9. Kids woke up and watched about 4 hours of television before we landed in Auckland – although Samuel watched The Lion King about 3 times so I don’t think it counts as too much TV. Only hiccup was that I left my favorite water bottle on the plane. I’m a little sad about that but, as far as hiccups go, I’ll take it.

10. Went through security one more time (overkill) where I forgot to empty the kids water bottles like a travel rookie – a move that was quickly fixed with a quick “skull” (Definition: to drink in a single draught without taking a breath). Found our favorite place to hang out in the Airport and the kids played quietly with Lego while I, again, read a book (gasp!). 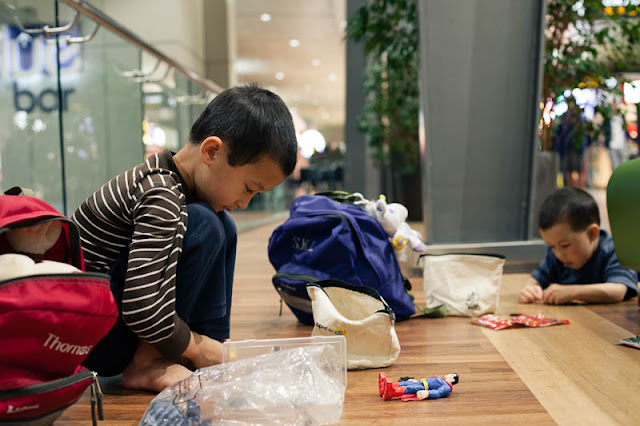 11. Headed down to the gate about 15 minutes before our flight boarded. I found a strip of relatively unoccupied space and had the kids run races up and down until they called us for boarding. To all the people who gave me dirty looks while I let my kids run around – YOU ARE WELCOME. You just don’t realize how much more pleasant your trip has become.

12. Boarded our final 3.5 hour flight to Melbourne. I managed to watch the end of a movie that I started on our previous flight while the boys watched their own TV for a while. Samuel then took out the lego so I set up the sky couch to catch any dropped pieces (seriously fantastic invention). 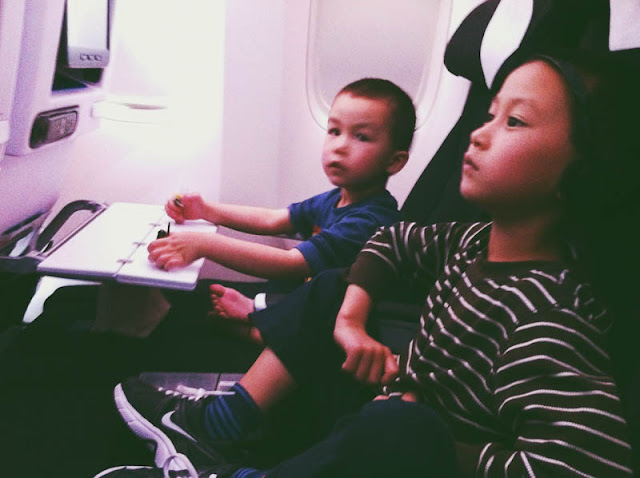 13. Finally touched down in Melbourne and this us what happened: flew through the immigration line (we were the only flight that had landed), grabbed both bags that quickly appeared on the the luggage carousel (huge sigh of relief), breezed through customs (even got to pat the sniffer dog) and then walked out the doors to be greeted by my brother and nephew.

All in all, the perfect trip. The boys behaved wonderfully apart from the appearance of Samuel’s “dark side” on a few occasions. A little yelling and demanding due to over-tiredness but thankfully no all out tantrums. Our flight even landed about 20 minutes early.

Of course I have a lingering fear that we used up all of our good luck on the way over and that our trip home will be disastrous but I think it’s always good to maintain a little bit fear. It keeps you on your toes.

This entry was posted in Australia, Samuel, Thomas, Travel. Bookmark the permalink.